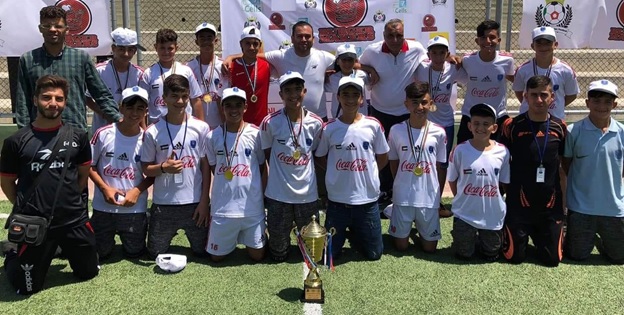 Beitunia – The National Beverage Company Coca-Cola/Cappy provided sponsorship to the football team of the Paris Saint-Germain Academy in Palestine as part of the team’s participation during last August in the 4th International Sharm El-Sheikh Championship of the Football Academy and the King Abdullah II Cup in Amman.  NBC provided the team with the full sports uniforms.
The Academy’s team has returned home after achieving good results in both championships. The academy championship included the teams of players born in 2002 and 2005 with the participation of a number of Egyptian and Arab teams, while the King Abdullah II Cup included teams of players who born in 2004 and 2005.
Mr. Imad al-Hindi, General Manager of National Beverage Company, praised the high level of the team during the tournaments, stressing the Company's keenness and pride of its management for sponsoring the junior and young teams to enable them to continue the track of success and achieve professionalism in the football game.  He also commended the role of the management and staff of the Paris Saint-Germain for bringing up the players to the international level, stressing the importance of cooperation between local sports teams and private sector institutions, especially at a time when young Palestinians are capable to achieve best results and demonstrate strong competition at the Arab and regional levels.
Mr. al-Hindi pointed out NBC’s interest in supporting the Palestinian sports of all types and specialties and all age groups for both sexes. He added that individual and group sports, especially football, have become a basic concern in the lives of the Palestinian youth, which is in line with NBC vision endeavoring to provide all types of necessary support to upgrade and develop the sports sector and the youth sector.
On his part, Mahyoub Leftawi, General Manager of the Academy in Palestine commended the support provided by NBC. He specifically thanked NBC management for its prompt response, he said "We are pleased to cooperate and work together with NBC, especially during international tournaments".
Leftawi explained added that the provision of the sports uniforms has significantly reduced the burden of the Academy to provide the full uniform for 40 players who participated in the two tournaments. The team of the south comprising the teams of Bethlehem and Hebron participated in the Sharm el-Sheikh tournament while the team of the north comprising the teams of Nablus & Toulkarem participated in the Jordan’s tournament. He also explained that the Paris Saint-Germain Academy in Palestine, which is affiliated to the Academy of France, embraces children aged 13-16 years, and has branches in eight provinces.