In its annual campaign of Back to School, In cooperation with the Ministry of Education, National Beverage Company donates 6000 schoolbags in the West Bank and Gaza Strip 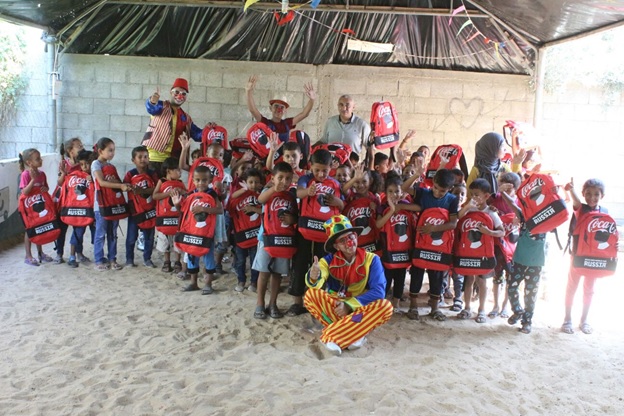 Beitunia - Al Hayat Economic:  The National Beverage Company Coca-Cola/Cappy (NBC) implemented its annual Back to School 2018 Campaign in favor of a number of school students in the remote areas of the West Bank and Gaza Strip. The Campaign was implemented in partnership and cooperation with the Ministry of Education and Higher Education and Basmat Amal Foundation for the care of cancer patients. This year's campaign included the distribution of 6,000 school bags, in which 2,000 bags were distributed in cooperation with all the Directorates of Education in the West Bank governorates, in favor of a number of school students in the remote and marginalized areas. 1000 bags were distributed to charities, orphanages and a number of centers taking care of sick and poor children in the West Bank; and 3,000 school bags were distributed to school students in the Gaza Strip, in cooperation with the Basmat Amal Association for Cancer Patients and the Society for the Harvest of Good and Merciful.
The Minister of Education and Higher Education, Dr. Sabri Saidam, commended the significant role played by NBC, at the same time every year. in addition to its enduring cooperation with the Ministry either by providing financial or moral support for a number of education programs in order to alleviate the burden on Palestinian students, especially in the difficult economic conditions they undergo. Dr. Saidam confirmed that this project is an embodiment of the principle of effective partnership between the Ministry and the Company based on social responsibility, serving the education sector, and working on the development of education, especially in the remote and targeted areas and the so-called C Zone. The Minister called on all private sector institutions to strengthen their partnership with the Ministry and contribute to the provision of education services, as the solid foundation for comprehensive and sustainable development.
Mr. Imad al-Hindi, General Manager of the National Beverage Company Coca-Cola/Cappy expressed his pride on the partnership with the Ministry of Education and Higher Education. He praised the efforts of the Ministry's staff and their cooperation with the Company by providing the logistic support under the kind instructions of HE Minister of Education, Dr. Sabri Saidam.
Mr. al-Hindi also thanked the managements of Basmat Amal Foundation, Hasad Al Khair Foundationand Mabarrat Al-Rahma Society for their good ongoing cooperation and active partnership in distributing the bags to the children of the Gaza Strip, particularly those in need.
Mr. al-Hindi stressed the Company's keenness to provide all possible support and assistance to the citizens in the Gaza Strip. He pointed out that NBC aspires to implement its annual campaign on this date every year to perform its commitment to its social responsibility towards the Palestinian families in the West Bank and Gaza by contributing to supporting the needy students, enabling them to continue their educational career and help them encounter financial and psychological conditions and challenges they face. He said we hope that we will be able to achieve the students' ambitions, adding joy to the souls of children, especially children with cancer who have a long period of treatment but who have a strong will and resilient determination to learn
On his part, Sami al-Joujou, General Coordinator of Basmat Amal Foundation, an institution concerned Patient Service, praised the initiative of the National Beverage Company to provide high quality school bags to the children of Gaza who suffer from poor living and psychological conditions. He stressed that the initiative supports the head of the family, who is sometimes unable to provide the school supplies for his children. Al-Joujou said that the Foundation's cooperation with NBC’s initiative this year was made along with entertainment activities by an accompanying group of clowns who performed a children's concert in order to present the Company's gift to them in an entertaining and caring manner.
The distribution of the bags was made to 20 charitable and community organizations in Gaza Strip, Rafah, Khan Yunis, Deir El Balah, Jabalia, Beit Hanoun and the central governorates. This included the First Step Kindergarten in Nusseirat, the Birth and Life Association in Bureij, the Mashtal Sports Club in Gaza, Women Programs Centers in Rafah, the Talaye Palestine Society in Khan Yunis, the Women's Programs Centers in Deir El-Balah, and Beit Hanoun Youth Club in the Northern Governorates.  The campaign also included the Women Programs Centers in Nusseirat, Al-Shifaa Society for Cancer Patients in Khan Yunis, Al-Makhateer & Reform Men Center in Deir El-Balah, the Palestinian Society for Cancer Patients in Deir El-Balah, the Women Programs Centers in Al-Shatie, Future Palestine Foundation in Gaza, Al-Amal Foundation for Orphans in Gaza, the Happy Kids Kindergarten in Al-Meghraqa, the Friends of Thalassemia Patients Association in the Gaza Governorates, as well as the Dreams Institute for Education in Gaza and the School Khan Younis Boys Primary School in Khan Yunis, Gaza Sports Club and Abdel Aziz Rantissi Hospital in Gaza.