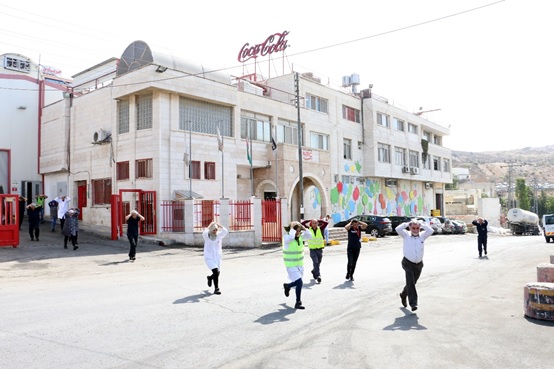 Ramallah – Alhayat Economic – The National Beverages Company Coca-Cola/Cappy (NBC) hosted a training exercise implemented by the Civil Defense at Coca-Cola Plant in the city of Beitunia where an evacuation exercise was applied in the presence of the Director of Civil Defense in Ramallah and Al-Bireh Governorate, Colonel Mamoun Al-Amour and Director of Police, Colonel Tarek Al-Haj. The exercise was attended by Mr. George Ouda, the Plant Manager and Mr. Alaa Esawi, the Technical Coordinator in the Company, as well as representatives of the security agencies and local institutions.
NBC’s Plant was evacuated in accordance with the scenario of leakage of gas at the Plant.  The event was handled by the Emergency Team of the company, which was trained by the Civil Defense. The leakage was addressed and the team followed all public safety procedures pending the arrival of the Civil Defense who evacuated the building from employees and contained the leakage.
Mr. Imad al Hindi, the General Manager of the National Beverages Company commended the great efforts which the Civil Defense Directorate made to preserve public safety, stressing that the Company is eager to offer cooperation and synergize efforts with the Department to ensure the soundness of emergency and safety systems at the plants of the Company and its headquarters. He added that the Company complies with all Civil Defense instructions as to safety and complete readiness to handle different accidents.
Moreover, he explains that, thanks to the training courses and lectures which the Civil Defense organizes on a regular basis for the employees of the Company, the emergency teams in the plants of the Company are very well trained and capable of handling accidents and threats first hand. In addition, the employees and workers of the plants are highly capable of evacuating the buildings to avoid hazards.
Colonel Mamoun Al-Amour thanked the National Beverages Company for participating in the execution of the gas leakage exercise and complemented the performance of its team which was trained by the Civil Defense. He also emphasized the importance of cooperation between the different companies, institutions and plants in the city in carrying out rescue exercises for the different cases of accidents, earthquakes and disasters.
Colonel Al-Amour said that a joint response system was implemented in collaboration between the police, the medical services and the Red Crescent, with the assistance of the National Security. He added that the implementation of such training exercises raises the level of readiness of Civil Defense teams and strengthens the concept of partnership between different authorities to identify certain issues that reflect performance in order that they are addressed and developed in a manner that serves work dynamics.