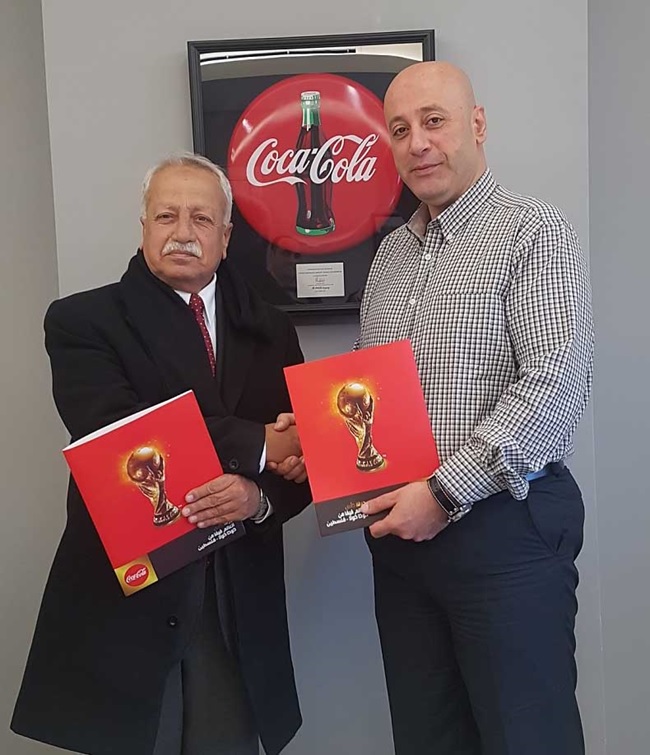 Ramallah –The National Beverage Company Coca-Cola/Cappy (NBC) signed an agreement with Kufor Zibad Village Council to contribute to the funding of a project to construct a water reservoir with a capacity of 200m3 for the interest of the town of Kufor Zibad, South-East of Tulkarem Governorate. The signing of the agreement came as part of NBC commitment to support the needs of the local community in order to mitigate the serious potable water crisis in the town and to address the needs of its people.
The agreement was signed at the headquarters of the Company in Beitunia in the presence of Mr. Imad al-Hindi, the General Manager of the National Beverage Company Coca-Cola/Cappy; Farouq Ghanayem, the President of Kufor Zibad Village Council; Ammar Najy, representative of Qasbah General Contracting Company, which will supervise the construction of the reservoir; Engineer Nael Al-Tawil, Projects Manager at NBC; Zakaria Asaad, the Manager of Cappy plant ; and Alaa EsawI, Technical Department and Public Relations Coordinator at NBC.
Regarding NBC’s support to the construction of a water reservoir in the town of Kufor Zibad which hosts the Company’s Cappy juice plant, Mr. al-Hindi expressed his happiness for signing the Agreement and said that "the management of the Company is proud to contribute to this vital and crucial project, which will benefit the town's people and help mitigate the crisis of clean and drinkable water in the region.
Mr. al-Hindi stated that the Company is proud of the partnership which has continued for years with the Village Council and with the people of Kufor Zibad, as the town hosted the Cappy Plant since its establishment and inception.  The plant has since developed and has been able to offer hundreds of direct job opportunities and thousands of indirect jobs over the past years with the support of the people of Kufor Zibad. The Company also made sure to recruit the competent workers from the people of Kufor Zibad, because the company views the Cappy Plant, its employees and workers as part of the social fabric of Kufor Zibad. He added that the Company’s interest in supporting Kufor Zibad is in line with the Company’s vision and one of the priorities of its Board of Directors in terms of creating opportunities in the regions where the company exists and operates, and seeking to develop such regions in order to make difference towards improving the economic and social conditions of their people.
Mr. al-Hindi explained that the contribution of the Company in supporting this project came in response to the pressing needs of the local community of Kufor Zibad and the neighboring areas, especially that the people suffer from severe shortage of clean water.  He indicated that NBC will spare no effort to provide the capabilities to support the citizens and address their needs.
Ghanayem also expressed his high appreciation and gratitude to NBC for its contribution to support the project, stressing that he and the members of the Village Council were proud of the ongoing partnership with the Company. He added that they consider Cappy Plant and NBC as part of Kufor Zibad’s community, particularly since the establishment of Cappy Plant in Kafriyat area has helped revive the area and had a major influence on the availability of opportunities for the youth and families in the town.
Ghanayem also stressed the importance of the water reservoir project, as it will address the needs of the citizens for clean and drinkable water, particularly in view of the water shortage crises suffered by the region.