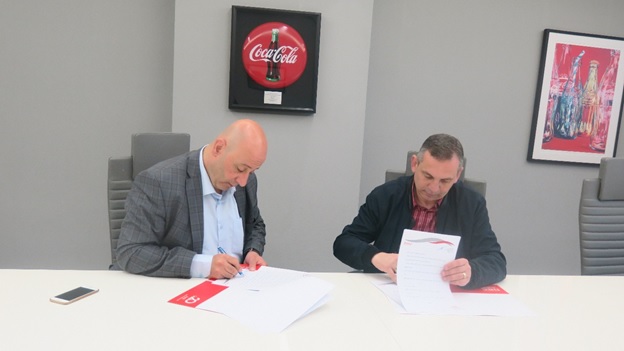 Beitunia - The National Beverage Company Coca-Cola/Cappy (NBC) signed an agreement with the Jerusalem De La Salle club, on sponsoring the club's emerging basketball team, including providing the team with supplies, sports equipment, and sports wears distinguished by Sprite logo. The Agreement was signed at NBC’s headquarter in Beitunia, in the presence of Mr. Imad al-Hindi, General Manager of NBC, Hagob Banian, President of De La Salle club, and George Khoury, Vice President of the Club.
Mr. al-Hindi affirmed NBC management's adherence to continue the partnership with the Jerusalem De La Salle club, indicating that NBC sponsored the first team of the basketball over six separate years during the last years, believing in the importance of providing support for local sports teams, especially in Jerusalem. He added: “This time NBC will sponsor the club's emerging team, which is a distinguished team with perfect players, and we will provide support and assistance to them and to all local emerging teams to make achievements and raise the level of basketball among young age groups."
He also stressed the importance of providing all possibilities that support sports in Jerusalem, in order for embracing the young girls and boys and guiding them towards a healthy sporting life, in the context of special circumstances the city witnesses. He said that NBC seeks to provide the largest part of support for social or sports institutions, including supporting the establishment of football schools, which contribute to creating the right environment to absorb and embrace the skills and possibilities of youth in very difficult economic and social conditions.
He praised the achievements and important historical record of the Capital De La Salle Basketball Team, stressing his pride of the club's players and its management. He hoped that this sponsorship contributes to continuing the team intensive training and raising the level of players to be able to participate in various tournaments locally, regionally, and globally.
On his part, Hagob Banyan, president of De La Salle club, expressed thanks and appreciation to NBC management for its ongoing support and care for the Palestinian youth, especially in Jerusalem, and for providing them with sports possibilities. He added that the partnership between NBC and the club has been going on for more than 12 years of positive and fruitful cooperation. He also pointed out that the De La Salle team will go in local and foreign training camps next summer, after finishing their participation in the Premier League, adding that the club management is seeking to renovate the old headquarter in the Old City of Jerusalem.