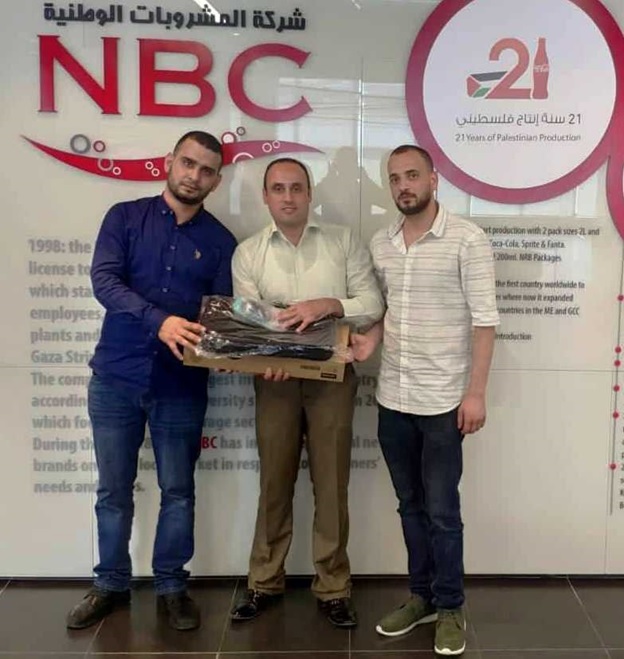 Jerusalem- Pal Sport Agency- On Sunday afternoon, Wessam Al-Bokhari, Media professional and Director of Pal Sport Network and Agency, and Sufian Al-Nimri, Head of the English Department at Pal Sport Network were guests at the headquarter of National Beverage Company Coca-Cola/Cappy (NBC) in Beitunia.   Alaa Esawi, Public Relations Officer and Technical Coordinator of NBC received them and conveyed the greetings of Mr. Imad al-Hindi, General Manager of NBC.
Esawi confirmed the Company's pride in partnership with Pal Sport Network and Agency, which began since the establishment of the network in 1999. He assured them that NBC is proud of its partnership with the Palestinian media in general and sports media in particular, whereas one of the Company's social missions is to support and sponsor more Palestinian sports clubs and academies, especially «football and basketball», and those dedicated to the emerging age groups, in all Palestinian governorates. He also assured that NBC also sponsors many teams, especially women's teams, whether teams of football, basketball or dueling.
On his part, Mr. Imad al-Hindi affirmed, in an interview with Pal Sport Network and Agency, that NBC has always endeavored to support Palestinian sports institutions and clubs in the various Palestinian governorates, especially in the city of Jerusalem for its important characteristics for sports development. He said that the company was and will still give The Holy City of Jerusalem special importance by sponsoring teams, academies and summer camps on the land of Jerusalem, which contributes to the enhancement of the holy presence in Jerusalem and bears many connotations, especially as the clubs and institutions in Jerusalem suffer difficult financial conditions hampering their development process, growth and continuity of the humanitarian mission.
Wessam Al-Bokhari praised the partnership and cooperation that NBC has provided to Pal Sport Network and Agency over the past years. He pointed out that they have had a great impact on the continuation of our media mission and the organization of many media courses and photography workshops to media spokespersons of all sports clubs and federations, students of Faculty of physical education in universities, and also to cover all youth and sports activities in Jerusalem.