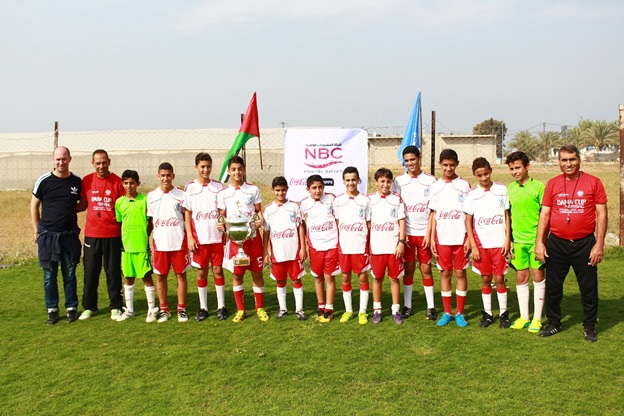 Beitunia - The UNRWA Junior Team returned from Oslo, the capital city of Norway, to Gazaafter taking partinthe Norwegian Cup in Norway and "Dana"Cup in Denmark. The National Beverage Company Coca-Cola/Cappy (NBC) co-sponsored the team's participation and has been sponsoring and supporting the UNRWA male junior team (14 years of age, consisting of 17 players) since 2013.  NBC covered the necessary costs to enable the team to participate in championships that took place in the recent few years. The team has won the Norwegian Cup in 2012, 2015, and 2016 and made it to the quarter-finals this year's version after winning six games in a row
.
Commenting on the team's participation, NBC General Manager, Imad al-Hindi, congratulated the team for their successful and honorable participation in both tournaments, reiterating NBC interest in supporting the development of the sports sector in Gaza by providing the best opportunities, and giving the players the best available means for training.  He also stressed the interest of NBC's management in supporting juniors and youth in the UNRWA camps in Gaza, which mostly have fewer opportunities to participate and compete in regional and international championships, not to mention the low economic and living standards in camps and marginalized areas.  Furthermore, he said that NBC takes pleasure in supporting the camp's children in any way that may please them, positively impact their lives, and enable them to build a better future and improve their tough life conditions.
"NBC takes pride", he added, "in continuing its support to the team and enable them to annually participate in international championships such as the Norwegian and the Danish cups, which proves to the world that Gazan children, in spite of their hard conditions, have as much creativity as their peers all over the world."
Jamal Natil, UNRWA Coordinator of Sports Projects, commended the contribution of NBC in providing support to the UNRWA Junior Team.  He confirmed that such contribution played a major role in the team's continuous success and in facilitating travel procedures for its players. Natil added that the UNRWA team, which participated in the Norwegian and the Danish cups, have received ongoing training for the past two years, and it also had a closed training camp in Gaza's middle governorates, thanks to all its sponsors over the past years.