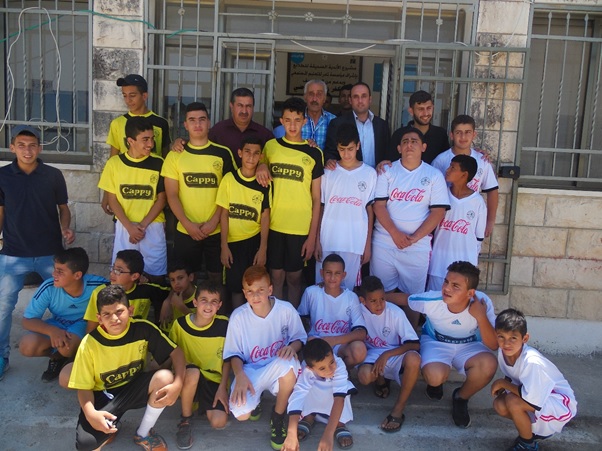 Ramallah- “Alayyam”: The National Beverage Company Coca-Cola/Cappy (NBC) donated sports supplies to Kufur Zibad Union team, including the apparel and shoes for the football and handball teams, in addition to footballs and handballs, in line with its endless support to the local clubs and the emerging teams, especially in the remote areas.
The apparels were handed over at the club’s headquarter in the presence of Mr. Alaa Esawi, representative of NBC Management, and Mr. Bashar Salem, Chairman of the Board of Directors of Kufur Zibad Union club.
Mr. Imad al-Hindi, General Manager of NBC, emphasized NBC’s devotion to provide all means of support possible to the local sporting and community clubs, especially in the unprivileged and remote areas. He affirmed pride of the high spirit of the players of Kufur Zibad Union Club despite the tough living conditions.
Mr. al-Hindi confirmed NBC’s dedication to sponsor the junior and young age groups out of its commitment and responsibility toward the sports sector and Palestinian youth so that they can build a better future for them and for their society, and have all opportunities possible to improve their skills. He said he is proud of the significant achievements attained by the club in the different sporting competitions.
Mr. al-Hindi added that providing the sporting club at Kufur Zibad village with the sporting supplies complements the series of projects and initiatives started by NBC years ago in cooperation with Al-Kafreyat Municipality at Kufur Zibad, Kufur Abbush, and Kur villages, including building of a backup water pipeline for the villages and development of Kufur Zibad medical Centre project, out of NBC’s Board and Management awareness of the importance of developing the infrastructure and improving the level of services in this region which suffers scarcity of resources, in addition to its concentrated efforts to provide the youth of the village with employment opportunities in  NBC’s factories located at Al-Kafreyat area.
Mr. Bashar Salem valued the continuous efforts and generosity of NBC Management to assist Kufur Zibad Union Club, which contribute to alleviating the financial crisis facing the Club. He said that the Club Management and members are proud of having NBC’s factories at Kufur Zibad village.
Salem added that this is not the first time NBC supports the Club which presents its services and sporting, cultural, and social activities to the males and females of different age groups as the Club has nearly 300 members, including children, young men, girls, and women. Salem pointed out that since its inception in 1996, the Club managed to reach the premier level in the handball sport, beside other achievements in the individual sports, such as jumping and marathon.