In partnership with the National Beverage Company, The Municipality of Halhul has funded the Rehabilitation and Expansion Project of Nuba Street and Wadi El Thil Crossroads 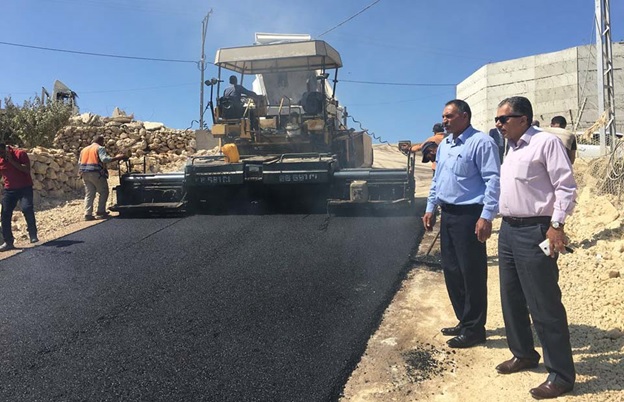 Hebron - Al Hayat Economic – The National Beverage Company Coca-Cola/ Cappy (NBC) and the Municipality of Halhul completed the project of paving the road between Nuba Road and the crossroads of the Wadi El Thil in the town of Halhoul near Hebron.  The project included rehabilitation, expansion and levelling of the street. The length of the street is 600 meters, and its width is 10 meters.  The project, which was funded by NBC in partnership with the Municipality of Halhul, aimed to facilitate the movement of parents, students and farmers in the region.
Mr. Imad al-Hindi, the General Manager of the National Beverage Company, stressed the Company's endeavor to provide all support to the local communities in all governorates.  He explained that the implementation of the Nuba- Wadi El Thil Project was in the context of the continuity of NBC's social responsibility towards the citizens and an embodiment of its constructive partnership with the municipalities, local and rural councils in all key sectors.
He added that "NBC is proud of the partnership with the Municipality of Halhul, and we are pleased with our contribution to the rehabilitation of the street, whose conditions was impeding the movement of the citizens and cause increased environmental pollution, noise, and harm to agricultural crops.
Mr. al-Hindi said that the Company sought to work hand in hand with all institutions and bodies which are keen to provide the best services to the citizens in the manner that achieves sustainable development of the local communities and ensures a decent living for them.  He also pointed out the importance of concerted efforts and participation of the private sector in supporting and sponsoring humanitarian, services and development projects, especially in rural and remote areas.
On his part, Eng. Hani Maraab, Director of the Engineering Department in the Municipality of Halhul, conveyed the thanks of the Municipality and the local community for the National Beverage Company, which mainly financed the project in addition to other financial contributions made by a number of the town's residents.  He valued the long partnership with the Company over the past years and commended its presence in all community initiatives.
He also pointed out the importance of the project, by which the street was levelled and expanded, especially before the start of the winter season.  The street serves a large number of residents and farmers. It is bordered by agricultural land that suffered from the destruction of crops due to the accumulation of dust.  The street is located at access roads of the regions of Kosbar and Al-Sheikh Valley.