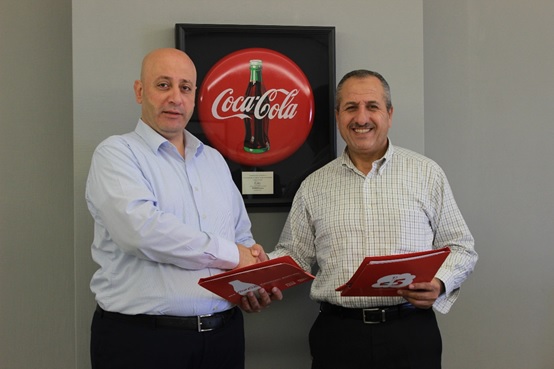 Ramallah - The National Beverage Company Coca-Cola/Cappy (NBC) and Al Bireh Youth Club Foundation, have signed an agreement to renew the sponsorship of the Club's joiner sports teams for the fourth consecutive year, targeting two groups of males within the age groups of 8 to 14 years, and one female group within the age group of 6 to 14 years. NBC's sponsorship includes providing the supporting teams with sports equipment, tools and clothes.

The agreement was signed at the company's headquarters in Bitunia, in the presence of Mr. Imad Al Hindi, the General Manager of the Company, Omar Atta, Chairman of the Board of Directors of Al Bireh Youth Foundation, Jamal Al Nesr, Treasurer of the Foundation, Alaa Al Saleh, Secretary of the Foundation, and Alaa Esawi of National Beverage Company Coca-Cola/Cappy.
In the signing ceremony, Mr. al Hindi emphasized the Company's interest in supporting the football academies due to the Company's believe in the need to support and develop young athletic talents, by qualifying them to share in the local, Arab and international competitions with high confidence. He stressed the company's adherence to supporting the youth and sports sector in order to build a better future for coming generations out of its adherence to the community responsibility towards them, and on the grounds of its believing in their capabilities.
Mr. al Hindi praised the achievements of the Al Bireh Youth Club and high determination, demonstrated by the Club's management and affiliate youth, to raise the level of football in Palestine through the football school and the supporting teams that give the Cubs and youngsters the opportunity for intensive training and to participate in local tournaments and in regional and international events and competitions in the future. He also praised the level of sports and social services and activities offered by the Club to its local community, stressing the keenness of the National Beverage Company to continue to support the Club and its football school as well as the affiliate teams thereof.
Mr. Omar Atta thanked the National Beverage Company which is one of the distinguished national companies in supporting many national institutions and sports and social activities. He appreciated the company's continuous support to the supporting teams of Al-Bireh Youth Foundation which includes the youth groups which we depend on in order to build a generation capable of bearing the trust and responsibility and building the future.
Mr. Atta pointed out that the supporting teams of the Club include 120 male and female players in the age group from 6 to 14 years who are always seeking to develop and get better opportunities in football, pointing out to their last participation in Ester championship in France where the players, born in 2004-2005, managed to win the "perfect team" title in the tournament, thanks to their training and refinement of their talents under the supervision of the best coaches who hold the highest certificates granted by FIFA.