To meet investors in Turkey, Jordan, and Bahrain National Beverage Company Coca-Cola/Cappy Supports the Journey of Five Startups from Gaza 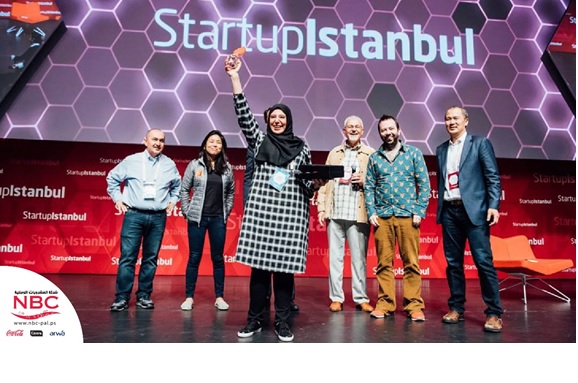 [Photo caption: Representatives of the Startups in Gaza]
Gaza: The National Beverage Company Coca-Cola/Cappy (NBC) contributed to the fund raising campaign to cover the traveling expenses of five entrepreneurship startups from the Gaza Strip, which are incubated in the business accelerator ‘Gaza Sky Geeks’, to Turkey, Jordan, and Bahrain to meet with a group of investors in these three countries with the aim of enabling the male and female entrepreneurs to promote their businesses and entrepreneurship in the Arab and regional markets.
Mr. Imad al-Hindi, General Manager of NBC, said that through its contribution to cover the traveling expenses of the startups, NBC aims at supporting the entrepreneurs in Gaza Strip and provide them with the necessary capabilities to network and promote their innovative initiatives, as well as enabling them to meet with the businessmen and investors in the region and introduce their entrepreneurship businesses, in addition to take off in the business arena like their counterparts across the Arab region and worldwide. He added that NBC supports the startups and the young entrepreneurs out of the strategic commitment upheld by the company since its inception to assist the youth, including enabling them to go through practical experiences in the labor market.
Mr. al-Hindi said he is proud of the creative ideas presented by the male and female entrepreneurs in Palestine and their ability to attain the achievements that many of the Palestinian entrepreneurship projects compete at the regional and international levels. He congratulated the startup ‘Momy Helper’ and its founder Nour El Khodary from Gaza Strip for winning the second place among 100 startups which were qualified to compete in the Startup Competition held in Istanbul at the level of Asia and Europe.
He also said that NBC is proud of such great achievement attained by the male and female entrepreneurs in Gaza Strip which demonstrates that the youth of Gaza enjoys great and creative capabilities. Mr. al-Hindi added: “such passion, strong determination, and desire of the youth to transfer the experience and lessons learned to others drive us to provide further care and support to enable them and to move forward and to turn their ambitions into reality and to advance their entrepreneurship projects to become real partners in building the people and the nation”.
The entrepreneurship projects included ‘Momy Helper’, whose founder and CEO is Nour El Khodary. ‘Momy Helper’ presents Arabic content to the Arab moms, including tips and advice through the website and mobile application of the company.
Among the startups is a company entitled ‘Vidmass’, whose founder and CEO is Abdullhamied AlFayomi. ‘Vidmass’ presents a video production engine which helps the companies in the Middle East and North Africa to produce visual content for the social media at reasonable cost. Other startups include ‘Tashbeak’, whose founder and CEO is Nuwar Abu Awwad. ‘Tashbeak’ is the first Arab online platform tailored to link the startups and entrepreneurs directly with the consultants and experts to assist them to develop their businesses. Another startup is ‘Kookies’ whose founder and CEO is Mohamed El Kurd. ‘Kookies’ is an Arab social network tailored to share Arab food recipes. ‘Izaari’ is another startup, whose founder and CEO is Hussein Mahdy. ‘Izaari’ is an online store that provides the young Arab designers with a state-of-the-art platform to sell and print out their designs on clothes, accessories, and furniture and deliver them to the shoppers across the Arab region.
On her part, Nour El Khodary, founder and CEO of ‘Momy Helper’, thanked NBC, and another range of sponsors and supporters, such as the business accelerator ‘Gaza Sky Geeks’, ‘Paltel Group’, ‘UCAS Technology Incubator’, and all the parties which contributed in the collective finance campaign for supporting and enabling them to meet with the businessmen and investors in the region where she managed to promote her project and learn the prospects of its development and marketing in the region and worldwide.
El Khodary expressed her happiness for winning the second place in the Startup Competition held in Istanbul and she considered such achievement as proof of the ability of the Palestinian young men and women to come up with creative ideas that help their communities. Further, such experience boosts the faith in her ability to continue and market her ideas not only in the region but also among the Arab communities worldwide.
She pointed out that her project aims at making changes in the world of motherhood and parenting.