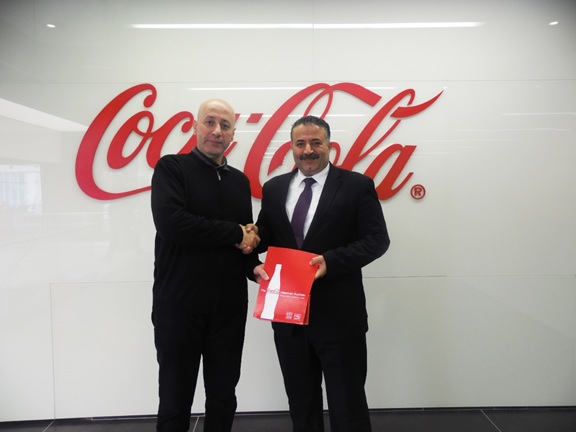 Ramallah – The National Beverage Company Coca-Cola/Cappy (NBC) and Beitunia Municipality signed an agreement to provide Beitunia with public bus stations, as part of the project of revamping and improving the southern entrance of the city of Beitunia which is implemented by the municipality.
The agreement was signed at NBC’s head office and was attended by Mr. Imad al-Hindi, General Manager of NBC and Rebhi Dola, Mayor of Beitunia. The agreement included providing Beitunia with twelve bus stations covering all parts across the city.
Mr. al-Hindi said NBC Management is always proud of its active partnership with Beitunia Municipality and contribution to the development and growth of the city. He added that the project of qualifying and beautifying the southern entrance of the city is important and that NBC, whose head office is hosted by Beitunia, is keen to take part in the successful implementation of the project as it is the first cooperation in 2018 whereas NBC will contribute in building twelve bus stations to serve the citizens who use public transportation, which would alleviate the pressure on the bus stations by distributing the stations on  scattered areas across the city, especially in the areas which are far from the main streets and the center.
During the meeting, Mr. al-Hindi appreciated all the efforts exerted by Beitunia Municipality and Mayor Rebhi Dola. He indicated that the successful plans set by the Municipality to develop the infrastructure of the city and serve its community are now turned into reality through the projects of improving the basic services such as sewerage, water, and improvement of the public educational and health facilities. Mr. al-Hindi further emphasized NBC’s determination to continue supporting Beitunia Municipality toward the success of all the plans aiming at serving the country and the people, and committing to a constructive and long-standing partnership between NBC and Beitunia.
Dola affirmed the deep partnership between Beitunia Municipality and NBC which is a strategic partnership that builds a flourishing future for the city of Beitunia and the beloved country. He added that through such partnership, the Municipality seeks the best interest of the people of Beitunia in all fields. He affirmed the Municipality’s commitment to serve the people and continue the journey of building and development.
Dola indicated that the bus stations which will be provided by NBC will protect the people, especially the students, in the various public concentrations, from the hot sun and the rains, and they will beautify the city. He appreciated NBC for supporting such common utility which stems from its commitment to its responsibilities toward the community and provision of utility projects to the people and development of its surrounding society.
The signing ceremony was attended by Mohamed Majdoubeh, General Manager of Beitunia Municipality, Attaf El-Deek, Manager of Projects Section, and Thaaer El-Taher from the PR & Information Department at the Municipality. From NBC, the ceremony was attended by Mohammed Maraqten, Marketing Manager, and Alaa El-Esawi, Technical Coordinator.