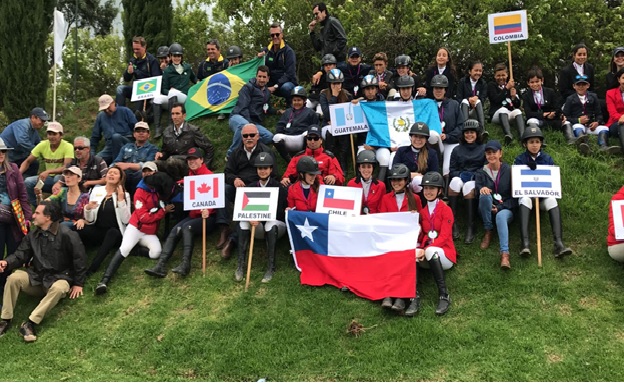 RAMALLAH, Alayyam – The National Beverage Company Coca-Cola/Cappy has sponsored the participation of the Palestinian Horse-rider, Laila Al-Maliki, in a training camp in Colombia in preparation for her participation in the 2020 Olympics to be held in Tokyo, this marks the first Palestinian Olympic participation in horse riding.
As part of this training camp, Al-Maliki participated in Columbia World Show Jumping Competition and came in the seventh place in this competition where 12 international teams participated, including the Palestinian team represented by Al-Maliki. She has also won the Best Performance Award for the visitor and resident teams.
NBC General Manager, Mr. Imad al-Hindi expressed his pride of the honourable participation of the young Horse-rider Laila Al-Malki in Columbia Championship, especially that she scored an advanced rank in this competition, despite her young age, as well as the logistical challenges she faces to train in Palestine. He has also praised the moral support provided by her family, stressing that NBC is keen on constantly support Al-Malki in the coming years and within the possibilities available as being her permanent partner.
“Determined and motivated, Al-Maliki should be a role model for young boys and girls to raise the name of Palestine in world competitions”, Al-Hindi added. This is what NBC aspires to instil in the young people. It prioritizes supporting and nurturing ambitious young athletes to enhance their talents, promote their abilities and performance, and enable them to compete in regional and global competitions.
Mr. al-Hindi added that Palestine is proud of Al-Maliki’s achievements in the training camp. He further urged the private sector companies to provide more support to these talents in order to encourage the local individual sports. He wished Al-Maliki better luck and stronger participation in the upcoming Olympics.
From his part, Raed Al-Maliki, the Horse-rider’s father, valued the efforts of NBC and its honourable care for his daughter. “Laila is very keen on and interested in her special talent and is determined and motivated to go for this challenge and represent Palestine in the global competitions” he said. He underscored the importance of supporting and nurturing Al-Maliki on constant basis by NBC to help her keep the advanced level to be able to participate in the world competitions, as it played a major role for her participation in Colombia training camp.
Al- Maliki has appraised how the company nurtured her talent and sponsored her training period with Coach Ahmed Hawwash. Her participation in Columbia Championship, as she pointed out, was largely successful, given that it is the first time for her to represent Palestine and the Arab world as well. She has passed the first rounds through the finals, where she performed well, and coming 7th in the 115cm show jumping competition.