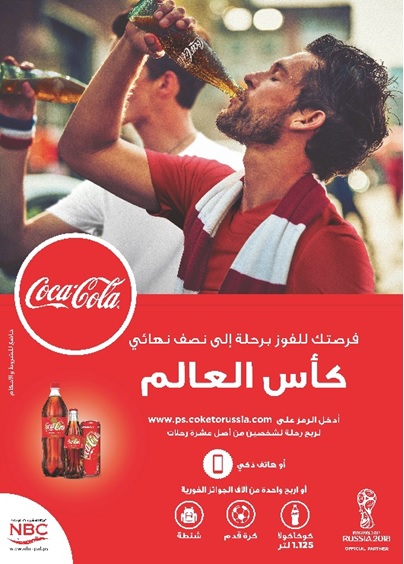 Beitunia – National Beverages Company Coca-Cola/Cappy (NBC) launched the 'World Cup 2018' campaign across all governorates of the West Bank and Gaza Strip. The campaign marks the continuation of the ceremonies welcoming the World Cup Trophy in Palestine, which took place on 17-19 February at NBC's headquarters. The campaign, which will continue till 26th April 2018, coincides with NBC celebrations of its 20th Anniversary.
After hosting a 3-day event to celebrate the arrival of the World Cup Trophy, NBC has provided the opportunity for all to take photos with the Trophy.  It has also organized trips for school and university students, and others for persons with special needs charities and foundations, as well as a number of national clubs and teams. In fact, Palestine has broken the record for most people visiting the World Cup Trophy; citizens from all governorates, to be specific 9,097 people, flooded NBC's Headquarters in Beitunia.
Extending the cheerful atmosphere of the World Cup Trophy tour, NBC has launched the 'World Cup 2018' campaign, which provides consumers with the opportunity to win valuable prizes. The first prize, to be presented to 10 winners, is a trip for twopersons to attend the World Cup semi-final, hosted in Russia next summer. The second prize, to be presented weekly to 20 winners, is Samsung S8 smartphones. There are also numerous on spot prizes.
Mr. Imad al-Hindi, General Manager of NBC, stated that NBC is not only committed to provide the best products and beverages to the Palestinian market in accordance with the highest quality standards, but it is also keen on organizing the 'World Cup' campaign so that it coincides with the world's preparation for " The Mondial", an event that only takes place once every four years. NBC's goal is to spread joy and happiness among family members by giving them the opportunity to win several valuable and diverse prizes. Mr. al-Hindi added: "NBC management is pleased to share with Palestinians these moments of excitement and anticipation unique to the World Cup.
We take pride in eternalizing these moments by providing Palestinian sport enthusiasts with the opportunity to watch the cup's matches with their own eyes. It is a decision that was made after we have seen how happy and enthusiastic football fans were when they came to NBC's headquarters where we hosted the World Cup Trophy tour".
Describing how the campaign winners are chosen, Mohammed Moraqtan, Marketing Manager of NBC, said that those wishing to join the draw for the first or second prize should enter the code under the Coca-Cola bottle caps on the campaign's website: www.ps.coketorussia.com. There will be a weekly draw over the course of 10 weeks for the 10 trips for two to attend the World Cup 2018 semi-final in Russia. The list of winners will be announced on the website. Moraqtan added that there will also be weekly draws for 20 Samsung S8 devices. The First draw will be on Saturday 3rd March 2018. Instant prizes will include: Coca-Cola World-Cup-styled football, Coca-Cola bags, and Coca-Cola products (1.125-liter bottles) to be obtained until 5th May 2018, from NBC branches or authorized points of sale in the West Bank and Gaza Strip. Winners of the first prize will get two tickets to attend the World Cup 2018 semi-final. The prize also covers the cost of their trips from the moment of departure until their return.
Coca-Cola products included in this campaign are the 300 ml, 330 ml, and 1.125 liter bottles. 'Diet' or not listed products are not included