Al Bireh: The Campaign of "Your Ramadan and Your Summer ... From the Goodies of Your Country" is launched under the sponsorship of National Beverage Company 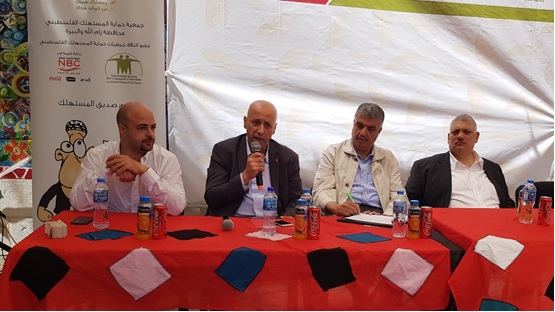 Al Bireh- the Economic Life:  The events of "Your Ramadan and Your Summer ... From the Goodies of Your Country" Campaign were recently launched in the yard of Al Bireh Cultural Center. The Campaign is organized by the Consumer Protection Society in cooperation with Al Bireh Municipality and under the sponsorship of the National Beverage Company Coca-Cola/Cappy (NBC).
The campaign aims at giving preference to the Palestinian products in the local markets. The campaign events attracted numbers of citizens who came to participate in the "Taste" campaign for numerous new types of juices, ice creams and dates.
Before the launched of the events, there was a joint press conference for the organizers in presence of Azzam Ismail, Chairman of Al Bireh Municipality; Salah Haniyeh, Chairman of Consumer Protection Society; Imad Al Hindi, General Manager of NBC and Ramzy Anabtawi from Al Arz Factory.
Mr. Ismail stated that supporting the national product would help in encountering unemployment in Palestine, as well as in creating job opportunities for the Youth. It contributes to maintaining the Palestinian capital within the local markets, in addition to eliminate dependence on the imported products, which necessarily would support and help develop the national economy in order to enhancing steadfastness of the citizens.
Mr. al-Hindi confirmed that promoting the national product would positively reflect on increasing confidence between the consumer and the local factories that has recently experienced actual development. Such factories have a direct impact in reducing unemployment rates in Palestine.  He pointed that NBC provides 660 direct job opportunities and 6600 indirect job opportunities in West Bank and Gaza Strip, which proves that the national industry is a key approach to tackle unemployment and to employ the Palestinian qualified resources, particularly the Youth and graduates. 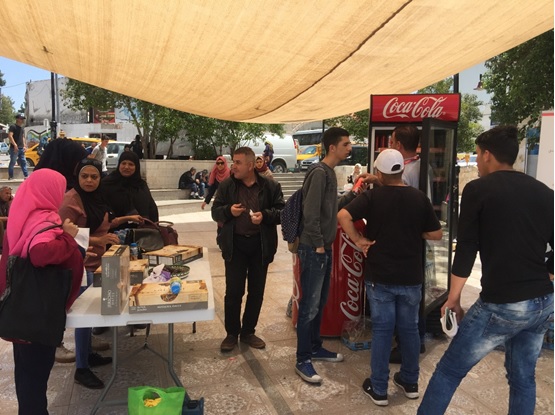 Mr. Haniyeh pointed out that "the campaign aims at increasing the share of the Palestinian products in the markets, particularly during the month of Ramadan and the summer season", adding that organizing the campaign for the sixth year in row is due to the success achieved in the past years concerning the high quality of the Palestinian products as per the international food standards and specifications, in addition to its ability to compete with similar products in the markets. He explained that the Palestinian products have witnessed distinctive diversification of new types recently.
Mr. Haniyeh said that "the Campaign confirms the implementation of the Government's resolution to give preference to the Palestinian products in the markets and in all public tenders for supplies."  He thanked Al Bireh Municipality for its ongoing cooperation by providing the place and all facilities required for organizing the Campaign, and affirmed the important role of the Municipality as a strategic partner in this event.
"The Campaign of "Your Ramadan and Your Summer ... From the Goodies of Your Country" is implemented by a commendable partnership and sponsorship of NBC, in addition to participation of the strategic partners of Al Arz Factory and Nakheel Palestine Company. The Palestinian consumers would have the opportunity to taste new and various types of local ice creams, juices and dates that are mostly consumed during the holy month of Ramadan.
Ramzy Anabtawi spoke about experience of Al Arz Factory that operates with higher capacity that enables it from exporting to foreign markets in Oman, Jordan, Kuwait and other countries, overcoming serious logistic difficulties and challenges. Furthermore, major merchants, representatives of chambers of commerce, the Food Industries Union and NGOs and society organizations were present in the launch of the event, in addition to participation by students from six schools affiliated to Ministry of Education.