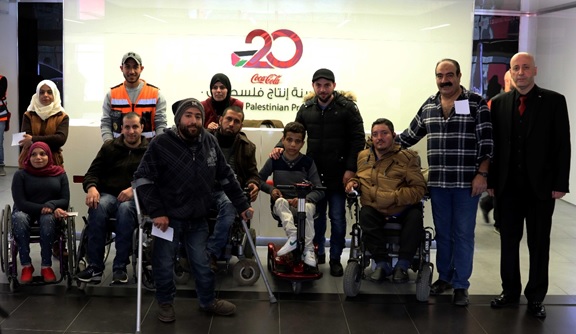 Beitunia- Al-Hayat Sports- Yesterday Palestine bid farewell to the World Cup Original Trophy in the end of a 3-day visit at the headquarters of the National Beverage Company Coca-Cola/Cappy (NBC) as part of its global tour across 50 countries around the world prior to the launch of the 2018 FIFA World Cup in Russia. In the last day of the event, crowds of people with special needs and school students in addition to hundreds of students from Palestinian universities and thousands of citizens visited the World Cup Trophy and took memorial photos. NBC received dozens of societies and institutions which cater for the people with special needs which were invited by NBC to see the Trophy closely and take memorial photos. Further, the visitors included some of the Palestinian Paralympics Committee members. According to Ramzi Abu El-Jedyan, from Al-Majd Sport Club for Persons with Disabilities, he gladly responded to the invitation sent to the members of the club to attend the World Cup Trophy hosting event as he believes in the importance of bringing the Trophy to Palestine, especially in light of the improved performance of the Palestinian national football team which raises a sense of pride. 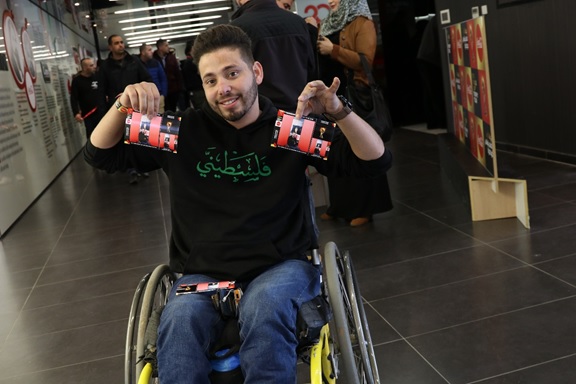 Although he lost the gift of eyesight, Abu El-Jedyan said he felt delight and joy in the voices of the children and guests in the hall which hosts the Trophy. Rany Bernut, Abu El-Jedyan’s colleague in the club, and who has a movement disability, said: “I have been dreaming for 37 years to see the real Trophy up close. Thanks to God my wish came true and I take this opportunity to thank NBC for giving me the chance to take a photo with the Trophy”.
Heba Zayed, from Hayat Society for Persons with Disabilities, said she is pleased to be present at NBC to see the Trophy in reality. Hasan Batta, an athlete and a member of the Palestinian Paralympics Committee, said he is proud and honored to see the World Cup Trophy in Palestine. He extended thanks to NBC for helping persons with disabilities to come to its headquarters. Batta also extended thanks to the national companies for supporting the sports of persons with disabilities. According to Sahar Afana, a teacher at Al-Nahda Women Association, engaging children with disabilities in this event is a very positive thing toward integrating them in their communities which is pursued by the Association in all facets of life.
Afana said: “We made sure to bring the children who understand such sporting event. Some of them are interested in the sporting events and play in the domestic Paralympics championships”. According to Sawsan Jradat, Vice Principal of the School for Hearing & Speech Impaired, affiliated to the Palestinian Red Crescent, the deaf students were very excited when they learned that the World Cup Trophy is in Palestine and they were pleased to play in the interactive electronic games tent and the miniature playgrounds. In the last day of the event, a large group of school and university students came from different governorates in the West Bank.
Hammam Samara, a first-year student at the Physical Education Department, Palestine Technical University-Kadoorei at Tulkarm, said that receiving of the World Cup Trophy in Palestine contributes in reinforcing the sportsmanship in the Palestinian youth and it is an outstanding experience for the university students. He noted: “The World Cup Trophy is a world in itself and despite its small size, it is so heavy and whoever holds it holds the entire world”. Jenna El-Khatib, a 16-year old football player from Fatima Al-Zahraa School at Jericho Directorate, expressed the joy she felt when she arrived to this place and said that she can’t wait to take a photo with the Trophy. She said: “I have never believed that the World Cup Trophy would ever land in Palestine. I was anxiously looking forward for this day”. 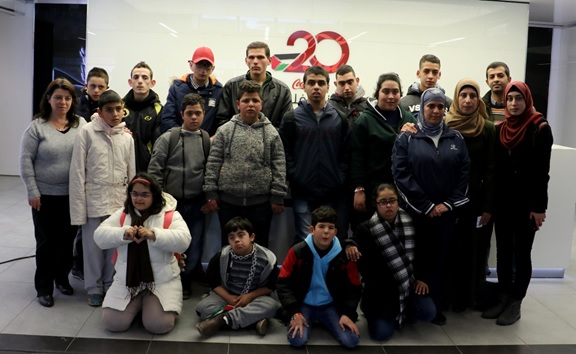 Qusai Forsan, a 16-year old student from Ali bin Abi Talib School, said that he is proud that the World Cup Trophy landed in Palestine and that seeing the Trophy is an opportunity and a wish for all the sports fans around the world. He extended thanks to NBC for organizing such beautiful day and for the nice and fun spirit surrounding the place. Sarah El-Tarada, a 14-year old basketball player from Taffuh Secondary School for Girls, agreed with Qusai’s words that seeing the Trophy is once-in-a-lifetime opportunity and she expressed happiness for this event.
A group of students from the schools located in Nablus governorate expressed happiness for getting the opportunity to take a photo with the World Cup Trophy in many ways. Qusai Mote’i said he is willing to go to the Trophy where ever it is. His 15-year old colleague Alaa Deyak affirmed that “hosting the Trophy in Palestine means a lot to him. Most importantly, it means that anything is possible in life and that one day the Palestinian team could be qualified for the FIFA World Cup”. Yazid Sowaidan, a 14-year old student from Al-Bustami School in Nablus, expressed joy and happiness for seeing the Trophy and he said “the World Cup is life”.
In the end of the World Cup trophy hosting event in the Palestine, Mr. Imad al-Hindi, General Manager of NBC, said he is proud of receiving the citizens, institutions, and students at NBC headquarters to see the Trophy. “The last day of hosting the World Cup original Trophy in Palestine received unprecedented massive crowds of people, sporting institutions, charity societies, universities, and schools, in addition to thousands of people and families who came to see the Trophy in the last hours before it takes off to Jordan”, Mr. al-Hindi confirmed.
Mr. al-Hindi affirmed that hosting of the World Cup Trophy in Palestine this year has a deep impact on the sports and football fans in Palestine. He added that such event embodies the sport achievements attained by Palestine, not only at the regional level, but also at the international level.