In Cooperation with the Islamic Charitable Society, Al-Awda and Rawan Centres National Beverage Company Coca-Cola/Cappy and Raya organize the ‘Farah’ events for 400 Children in 3 Governorates 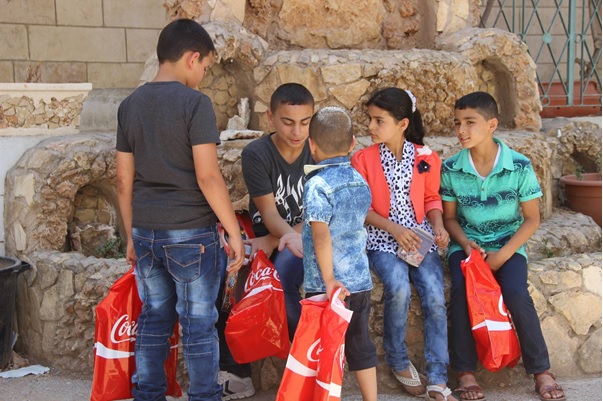 Ramallah- Alhayat Economic - The National Beverage Company Coca-Cola/Cappy (NBC) organized, in partnership with Raya Media Network, the ‘Farah’ events for the orphan children and children with special needs in three governorates by the end of the holy month of Ramadan and during Eid al-Fitr. The event hosted 400 children in cooperation with the Islamic Charitable Society, Rawan Association for Child Development / Centre for Speech & Learning Difficulties in Ramallah, and Al-Awda Centre for Childhood and Youth Welfare. The activities included distribution of gifts, interactive contests, and face painting with the participation of clowns.
Mr. Imad al-Hindi, General Manager of NBC said: “The Company has always sought to share with all Palestinian children their joy in various occasions, especially supporting the deprived children and children with special needs with the objective of integrating this group with the other groups being an integral part of our Palestinian society.  We took the initiative to participate and support these activities which targeted children with autism disorders and learning difficulties, in addition to children with disabilities”. Mr. al-Hindi asserted the importance of continuing the partnership with various Palestinian sectors to support this child group.
“We take pride in our partnership with the distinguished Raya Media Network and we appreciate the efforts exerted by its Management represented in its Chairman Bassam Walweel and the entire Raya Media Network family for their projects which serve the Palestinian society and for providing meaningful and useful materials in the media context”, Mr. al-Hindi added.
On his part, Bassam Walweel, Chairman of Raya Media & Publishing Company, confirmed that the participation of Raya FM Network and Radio in the activities of pleasing the children during Ramadan and Eid al-Fitr comes in line with the commitment of the company to its social responsibility toward our people and its plan to continue being close to the citizens, their concerns, and needs.
Walweel added that Raya is fully willing to support such activities; especially they are related to pleasing children who suffer different disabilities and need support especially during Ramadan and Eid al-Fitr. He said that Raya Network and Radio always shed the light on the marginalized groups as part of its policy which is based on the phrase “Citizen is the Capital of Meaningful Media”
He went on to say that Raya’s vision is not only based on the fact the media is news, but media is development and an effective role in achieving the social change.
NBC and Raya Media Network organized a special party in cooperation with the Islamic Charitable Society at Hebron. Naguib Taha, from the PR Department at the Islamic Charitable Society, said that this event has remarkably pleased the orphan children especially during the occasions when they have the worst time as they miss their parents, noting that such event made them extremely happy.
Moreover, in partnership with Raya Media Network, NBC organized ‘Farah’ events for the children in cooperation with Al Awda Centre for Childhood and Youth Welfare at Tulkarm. Khetam Taurabin, Academic Supervisor of Al-Awda Centre for Childhood and Youth Welfare, pointed out that creating an atmosphere of joy for the children with autism and disability is unique and different. She noted that the emotions on the faces of children with autism and learning difficulties were obvious especially when they were receiving the gifts.

Additionally, NBC participated in a charitable Ramadan Iftar party for the children and their families in cooperation with Rawan Association for Child Development/Centre for Speech & Learning Difficulties in Ramallah and in partnership with Raya Media Network under the support of Hand in Hand Foundation. Salam Asia, Chief Executive Officer of Rawan Association for Child Development, extended her thanks and gratitude for the efforts exerted by all the people in charge of the Iftar. She noted that NBC continues giving and supporting the Association for years. She asserted that such events have a positive and obvious effect on the spirits of children beyond the firmness of the educational process and that the entertainment activities contribute to uplifting and developing the academic education p