As part of “Support & Win with Coca-Cola” Campaign, National Beverage Company Coca-Cola/Cappy fulfils the dream of Palestinians to attend the Quarter Final of the UEFA European Championship 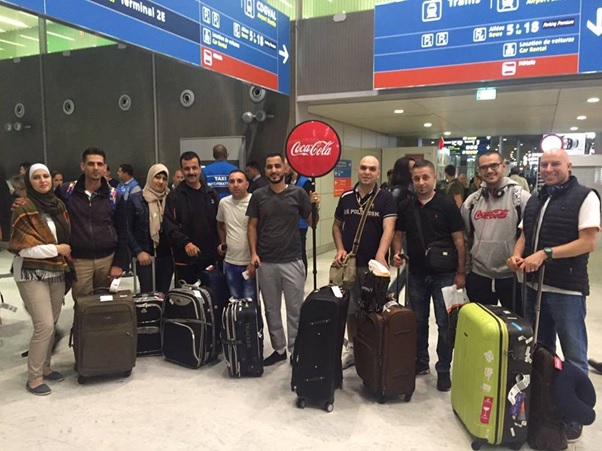 [Photo caption: Winners of a trip to attend the UEFA European Championship]
Jerusalem- Pal Sport Agency- Upon returning from the French Capital, Paris, after attending the Quarter Final of the UEFA Champions League, Ahmed Abu Tabikh of Ramallah, who travelled with his friend, and Ayman Salama of Nablus, who travelled with his wife, expressed their happiness for living this joyful experience. They considered the experience and the trip provided by the National Beverage Company Coca-Cola/Cappy (NBC) as a dream come true.
In a phone interview conducted by the reporter of Pal Sport Network and Agency with some of the winners of the trip after returning from Paris, the first winner Ahmed Abu Tabikh expressed his happiness with the trip which he considered as historical. He also praised the coordination and attention they received from the moment they departed from Palestine until they arrived to Paris and during the return trip as he thanked NBC which provided them with the amenities from Palestine to Paris and during the return trip to the home-country. He also commended NBC administrative staff for their efforts.
The second winner Ayman Salama affirmed the prominent role performed by NBC at the sport level which fulfilled his dream to attend the Quarter Final of the UEFA Champions League and he described winning of the prize as the most beautiful surprise he ever had.
On the occasion, Mr. Imad al-Hindi, General Manager of NBC, confirmed that  “Over the past years NBC had a distinctive role at the community level supporting and sponsoring activities, clubs, and sporting unions and academies for both genders in all governorates countrywide as part of the community program sponsored by NBC.  As to these ten prizes to attend the Quarter Final of the UEFA European Championship, we covered the trips of the winners and their companions including the tickets and accommodation for three days in France in addition to the costs of transportation back and forth from Palestine. Further, each winner and his companion had the opportunity to see the most prominent tourist landmarks in French Capital, Paris”.
Mr. al-Hindi added that NBC always strives to give the youth the opportunity to experience the atmosphere of the distinguished international championships in addition to sharing with the Palestinian family the happy occasions constantly through NBC’s distinctive campaigns. He added that through the “Support & Win with Coca-Cola” campaign, NBC endeavored to give the biggest number of consumers the opportunity to win many prizes, most prominently, the trip to France which is a dream that NBC fulfilled for many persons since its inception and to date.