Supported by the National Beverage Company Coca-Cola/Cappy, Opening of the ‘Counselling Corner” at Beitunia Secondary School for Girls 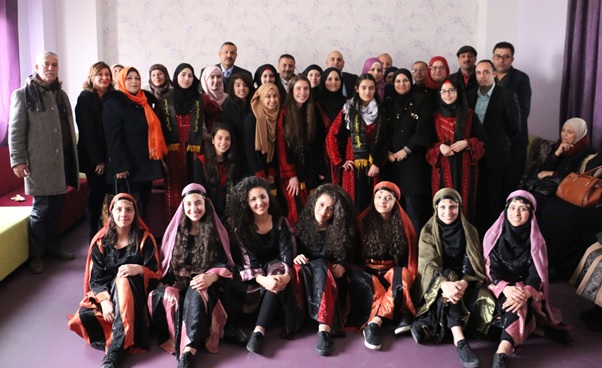 [Photo caption: A group picture of the ceremony]

Ramallah- Alayyam: Beitunia Secondary School for Girlsand the School’s Student Parliament, located to the west of Ramallah, recently opened the first special counselling room (Counselling Corner) in Palestine under the auspices of the Ministry of Higher Education and with the support of the National Beverage Company Coca-Cola/Cappy (NBC) in partnership with the Beitunia Municipality.
The room was equipped in response to an initiative proposed by the students in the Student Parliament of the school with the objective of providing a supportive environment for the students.
Bassem Oraiqat, Director of Education in Ramallah and Al-Bireh Governorate, said that the idea of equipping a special counselling room came in line with the mission of the Ministry of Higher Education, which realized that with urban and scientific development, people have been under increasing pressures and the youth must be guided in order to create a generation that embraces and observes high ideals. Further, the youth must be ideally guided within the values, customs and traditions of the society.
He asserted that in light of the many challenges of life, the students need guidance to the straight path, therefore, the Ministry of Education created the General Department for Counselling and Special Education and supplied the schools with male and female counsellors to follow-up the students and solve their social, psychological, and family issues, which had a positive impact to mitigate the aggravation of such conditions in strict confidentially to protect their privacy.
Bilal Abu Hijleh, gave a speech on behalf of Mr. Imad al-Hindi, General Manager of NBC, in which he praised the efforts of the Ministry of Higher Education and the General Directorate of Counselling and Special Education in supporting the counselling initiatives in the educational institutions.
He added: “we are pleased to be partners in this effort by supporting the creative ideas which contribute in assisting the students to choose their courses in life and face any obstacles that come in their way, as well as improving their academic standard by caring for the psychological health. We are pleased to see these ideas translated into reality in all of our schools”.
In his speech, Abu Hijleh affirmed the diligence of NBC Management to reinforce and continue the fruitful partnership with the Ministry of Education, which in turn managed to achieve a remarkable development in the education march recently. He commended the attention paid by the Minister Sabry Saidam to promote and reinforce the education march with the modern education methodologies and extracurricular activities, which would refine the students’ personalities and encourage them to be creative and develop a passion for education.
On his part, Rebhi Doleh, Mayor of Beitunia, emphasized that education is a top priority in the municipality. He asserted that the current generation is the one that will build and liberate Palestine, which requires collective action to help this generation in order to fulfil the martyrs’ dream”.
Gadeer Abu Bakr, Principal of Beitunia Secondary School for Girls, valued the prompt response by NBC to equip the counselling room and for embracing a sublime idea to serve the students, noting that this is not the first cooperation of its kind with NBC.
He explained that the room was furnished in accordance with the highest standards including high-quality flooring, wallpaper with comforting colours, a screen for counselling videos and applications, and wooden shelves to present the publications and specialized books.
Abu Bakr noted that the counselling classes target the 400 students of the school and they will be taught by Soha Fayez, education counsellor, who has been working in the school as an education counsellor for 3 years and she was proactive embracing this idea being the first specialized counselling room in Palestine.
Soha Fayez, Education Counsellor, noted that the idea started as an initiative by the students in the school parliament. She asserted the importance of introducing the counselling corner in the school and its impact on the psychological aspect of the students which will improve academic achievement.
Student Nada Mokhalefa, President of the School Parliament in the school, gave a speech and said that the Student Parliament introduced the idea of furnishing a special counselling room to assist the students to practice the psychological discharge, change the traditional classroom environment, and solve their problems.