To enhance the environmental and health conditions in the village, National Beverage Company Coca-Cola/Cappy donates 16 dumpsters to the Village Council of Rujeib 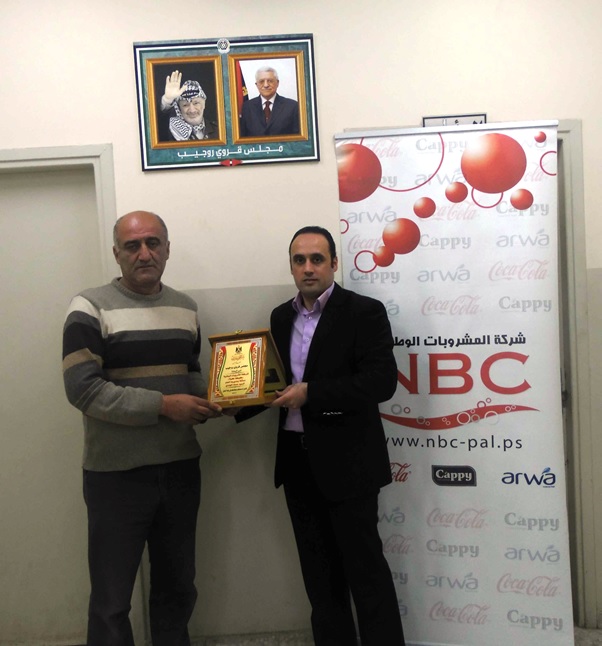 Nablus- Al-Hayat Economic - The National Beverage Company Coca-Cola/ Cappy (NBC) delivered 16 dumpsters to the Village Council of Rujeib in order to improve the environmental and health conditions in the village, located southeast of Nablus. The donation came in response to the Village Council’s initiative aiming at solving the problem of lack of dumpsters in the districts of the village causing the proliferation of health hazards. The dumpsters were delivered in the presence of Mr. Alaa Esawi representing NBC and Mr. Awny Dweikat, Head of the Village Council of Rujeib.
Mr. Imad al-Hindi, General Manager of NBC, confirmed the company’s care to support and cater for all the projects targeting the health and environment sector in Palestine which pursue serving of the citizens and securing a healthy, green, and disease-free environment. He noted that NBC Management is specially interested in enhancing the environmental conditions in the remote and marginalizes areas in particular and assisting the municipal and village councils in the implementation of initiatives and programs which aim at improving the living conditions of the population.
Mr. al-Hindi emphasized NBC’s devotion to embrace and support such initiatives in partnership with the official and civil organizations in order to improve the living conditions and ensure clean and healthy environment our people deserve in the less privileged areas.
Mr. al-Hindi applauded Rujeib Village Council’s efforts and significant role serving the Rujeib population. He added that NBC met the demands of Rujeib Village Council to provide the dumpsters in consistency with NBC’s commitment to the environment which in turn follows environment-friendly practices in its activities in compliance with the laws and international regulations applicable worldwide. Further, NBC promotes the events related to the environment, and recycling and reuse of solid waste which benefit of the local community and raise the awareness about the importance of preserving the environment in Palestine.
On his part, Mr. Dweikat said the council and the village’s population are grateful for NBC for its prompt response to the initiative of placing 16 dumpsters; 2 in each of its 8 districts. He affirmed that such initiative reflects the council president’s attention to preserve the environment in a healthy and clean condition. He added that within a few days NBC rushed to support such direction out of its renowned commitment to support the environment and health projects.
Mr. Dweikat pointed out that Rujeib suffered from over twenty health hazards as the population amounting to 5500 persons had to throw the garbage outside of their houses and on the crossroads because they had no dumpsters. He called upon all the private companies and institutions to take after NBC supporting the projects in the remote areas and performing the initiatives that aim at serving the population.