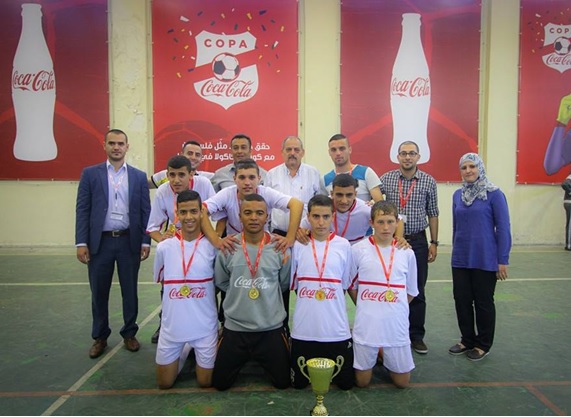 Ramallah - Al-Ayyam:  Mawaheb At-Taif Team was crowned as the Champion of Copa Coca-Cola Football Quintets for juniors at the level of Palestine, which was organized by the National Beverage Coca-Cola/ Cappy. The team thus qualifies to represent Palestine in Copa Coca-Cola International Competition, which will take place in Germany during the current year.
The team achieved the title after his victory over Nablus Directorate Team by penalties, as the two teams met in the final match recently on the playground of Ramallah Recreational Center.
The Company crowned the title holder "Mawaheb At-Taif" team in the presence of Jamal Farhoud, the Director of Sports Activity, Aareef Asayera, the Head of Sports Department, Nadeen Nakhlah, the Sports Officer and Sports Supervisor of Nabulus, and Tayseer Alawneh.  It was announced that the team has qualified to participate with the junior teams from all over the world in the Copa Coca-Cola International Competition, which will take place in Germany during the summer of 2015.
Mawaheb At-Taif Team attained the first place in the Copa Coca-Cola Tournament for local juniors, 12 to 15 years old, organized by the National Beverage Company Coca-Cola/Cappy in conjunction with the Copa Coca-Cola International Competition after a competition among 32 teams of the same category.
NBC concluded Copa Coca-Cola Football Quintets Championship for schools last month with Nabulus Education Directorate finishing as the winner. NBC organizes this competition in cooperation with Ministry of Education and Higher Education for the seventh year in a row.
Mr. Imad al-Hindi, General Manager of NBC, congratulated the team and praised their sports spirit and the passion manifested by the juniors for football in Palestine. He said “We thank and congratulate everyone who participated in Copa Coca-Cola Championship, and we are really proud of the high and sports level that our sons showed, which promises Professional football players. They will bear Palestine name in the future at the regional and international level.
Mr. Imad al-Hindi valued the role of Ministry of Education and Higher Education and its concern to organize the Annual Championship of Copa Coca-Cola Football Quintets at the level of the schools affiliated to the Directorates of Education, and the Ministry's care for sponsoring the young talents at schools, pointing out that, without its continuous support, Copa Coca-Cola would not have been able to make any achievement in respect of increasing the number of the teams participating in the champion.
He indicated that NBC seeks through this company the variation of the activities offered to the students during the educational stages, and that to provide them with the positive energy that drives them to innovation and staying active, in addition to helping students in learning, as the sports activities and enabling the students to innovate contributes in driving the student to the persistent work and innovation, which reflects positively on their academic level as well as their sports level.
He also thanked the local junior teams who showed much passion and eagerness to contribute in Copa Coca-Cola for junior teams at the local level. He added "This great care for football we saw in this age group, motivates us to be more supportive, commit to organizing the championship annually and provide the opportunity to the juniors in Palestine to participate and show their skills and talents in the context of a positive sports competing which enhance the physical and mental health in our sons and raise the spirit of the team"
Al-Hindi assured that NBC cares for providing the juniors with the opportunities to show their sports skills and refining these skills, as sports is one of the necessary factors to provide the youth with a physically and mentally healthy life.
Al-Hindi also sees that holding competitions like Copa Coca-Cola, and in a continuous way, can show the hidden talents and energies of football that have not been showed yet. He indicated "The Company committed to organizing Copa Coca-Cola for 7 years in a row out of its belief in the importance of the Tournament to embrace junior talents. This year was distinguished, as the Company worked on expanding the scope of the Tournament to include junior teams from the local community, like Copa Coca-Cola Tournament that is held all over the world, which will enable the students to be qualified to participate at the international level and show their talents in addition to benefiting from the experience of international teams in the football field through providing the opportunity to the winning team to bear Palestine name and participate in Copa Coca-Cola international matches.
Al-Hindi expressed his happiness because of the young talents that appeared during the Copa Coca-Cola Quintets Tournament for 2015, and said "Over the last six years, we were amazed by the young football talents and their passion to practice this sport, and the styles and techniques of playing we have seen, make us sure that our decision to expand the scope of the Tournament was right, which enhances our belief that the Palestinian youth is able to achieve the internationality and raise the Palestinian flag over the local and the world sports map".
He added "The Company cares for contributing in involving the Palestinian youth in the world sports events, as it has a positive direct effect on developing the Palestinian sports and showing the hidden talents of the youth through providing equal opportunities for everyone; males and females.

Al-Hindi pointed out that the Company seeks to organize the championship in Gaza Strip during the summer of 2015 to provide the Gazan juniors with the opportunity to participate, and he said "We understand that there are very distinguished sports skills among our juniors and young people in Gaza Strip, so we exerted efforts to complete the arrangements to organize Copa Coca-Cola in Gaza St