As part of the “Cheer and Win with Coca-Cola” Campaign, and wih Participation of 9 Teams The Palestinian Academy Launches the UEFA EURO 2016 Tournament on Three Playgrounds in Jerusalem 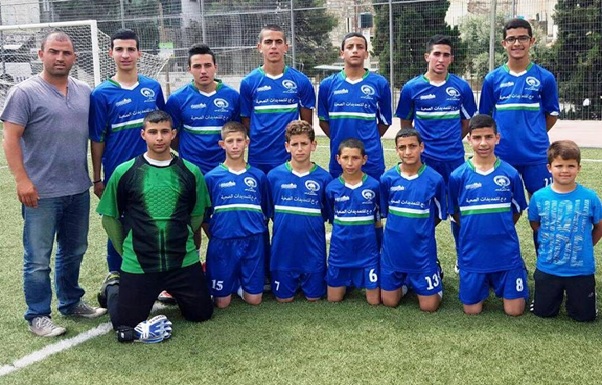 Jerusalem – Pal Sport – The Palestinian Football Talents Academy recently launched a football championship for youngsters born in 2001/2002 to be played on three grass playgrounds in Jerusalem, namely: the Mount of Olives, Isawiya and Beit Safafa.
This championship is a part of “Cheer and Win with Coca-Cola” Campaign, which was initiated by the National Beverage Company Coca-Cola/Cappy (NBC) for 2016 summer in the governorates of the West Bank. NBC has allocated valuable prizes for the championship as five participants will attend one of the UEFA EURO 2016 matches in France. NBC will cover the tickets and accommodation for three days in France and the cost of attending the match.
Mr. Firas Abu-Mayyaleh pointed out that nine teams from Jerusalem will compete in this championship. They were divided into three groups. The draw was made last Tuesday at the Academy in Jerusalem, and it was as follows:
1st Group: 1. Palestinian Academy, 2. Beit Hanina Youth Center, 3. Future Academy.
2nd Group: 1. Silwan, 2. Mount of Olives, 3. Sur Baher
3rd Group: 1. Beit Safafa, 2. Employees, 3. Isawiya.
The Palestinian Football Talents Academy and Beit Hanina Youth Center inaugurated the championship on the playground of Mount of Olives.
The matches of the 1st group, which included the Palestinian Academy, Beit Hanina Youth Center and Future Academy, were played on Isawiya playground on Thursday. The results were as follows:
The Palestinian Academy won Future Academy 5/3. The goals were scored by: Mohammad Aziz (2), Mohammad Hammoud (2) and Tareq Warasneh for the Palestinian Academy; and Abdullah Hadeyeh, Amir Asaad and Ma’mon Halaseh for Future Academy.
The Future Academy won Beit Hanina Youth Center 3/0. The goals were scored by: Ma’mon Halaseh, Abdullah Oweisat and Ahmad Khawaja for Future Academy.
The Palestinian Academy won Beit Hanina Youth Center 6/0. The goals were scored by: Tareq Warasneh (2), Mohammad Aziz, Faris Salameh, Mohammad Hammoud and one own goal.
The matches of the 2nd group, which included Silwan, Mount of Olives and Sur Baher, were played on Mount of Olives playground. In the first match, Sur Baher won Silwan 4/2 and Mount of Olives won Silwan 5/4. The third match was interesting in which Sur Baher won Mount of Olives 1/0 and qualified as head of this group.
Today, Saturday, the matches of the 3rd group will be played on Beit Safafa playground. The group includes Beit Safafa, Employees and Isawiya.
The matched were led by the international referee Amin Al-Halabi.
Mr. Imad al-Hindi, General Manager of the National Beverage Company Coca-Cola/Cappy, expressed happiness for the idea and for organizing a championship to bring the youngsters of Jerusalem together on the playgrounds of the city.
He confirmed that the team winning the championship will receive a sport uniform similar to the team they hold its name in addition to the cups and medals for the first three-ranking teams. He also indicated that the Company pays great attention to the sports in the Holy City through sponsoring sport academies, activities and events of Jerusalem clubs for several years.
The company has recently sponsored a football and basketball academy at Silwan club and provided silver sponsorship for Jerusalem International Championship organized by the Palestinian Academy in Jerusalem.