As part of the "Cheer & Win with Coca-Cola" Campaign, Beit Sfafa is the Champion of the UEFA Euro Quarter-Final and the Employees Club came second 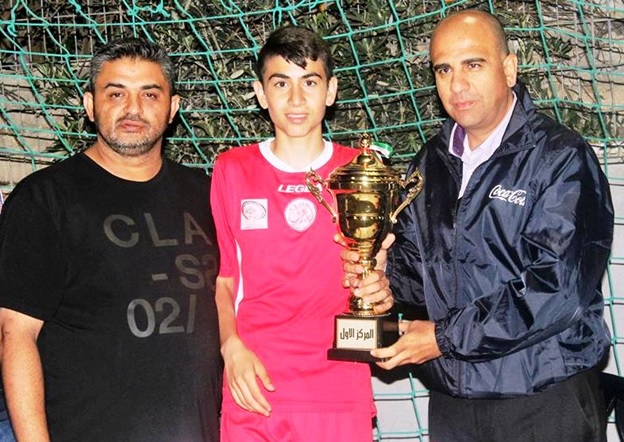 Jerusalem – Pal Sport Agency - Al-Arabi Bait Sfafa Club playground witnessed the playoffs of the UEFA Euro Quarter-Final where four teams competed over the title of "UEFA Euro in Jerusalem", dedicated for those born in 2001-2002, under the "Cheer & Win with Coca-Cola" campaign, which was launched by the National Beverage Company Coca Cola/Cappy (NBC) for the summer of 2016 in the West Bank governorates and was organized by the Palestinian Football Talents Academy.
Nine teams from Jerusalem participated in the championship and the matches were held on three playgrounds in Jerusalem; namely Jabal Al-Zaytoun, El-Eissaweya and Beit Sfafa on Wednesday. The four teams are Al-Arabi Beit Sfafa (the land owner), the Palestinian Football Talents Academy (organizer), Sour Baher, and the Employees.
In the first match, the Employees team won over the Palestinian Football Talents Academy and in the second match Al-Arabi Beit Sfafa won over Sour Baher. In the final game, the Employees played against Al-Arabi Beit Sfafa where the latter predominated with two clean goals and received the championship cup while the Employees ranked second and the Palestinian Football Talents Academy came in the third place.  Firas Abu Mayaleh, President of the Football Talents Academy, organizer of the championship, indicated that the four participating teams were named after the four teams, which play in the UEFA Euro Quarter-Final, namely: the Employees Atlético Madrid, the Academy Liverpool, Sour Baher Manchester, and Al-Arabi Real Madrid.
In the end of the games, a ceremony was held to crown the participating teams in the presence of Amer Al-Qiq, Sales Export Senior Supervisor in NBC, Firas Abu Mayaleh, President of the Football Talents Academy, Ahmed Al-Bokhari, Secretary of Qudsuna Gathering, Jehad Ewida, President of the Palestinian Academy for Martial Arts, Walid Alyai, President of Al-Arabi Beit Sfafa Club, Sheikh Nour Al-Rejbi and Nihad Al-Zoghair, from the Board of Directors of Employees Club, Wessam Al-Bokhari, Managing Editor of Pal Sport Network and Agency, and the technical committee of the championship represented in managers Gawwad El-Sabah, Mohamed El-Abbasi, and the international referee Amin El-Halabi.
In the beginning of the ceremony, Sheikh Nour Al-Rejbi gave a speech and called everybody to rise in respect of deceased of the sports movement in Jerusalem and son of Al-Arabi Beit Sfafa, Dawood Aouda, asking them to recite Al-Fatiha.  Al-Rejbi then commended the championship and congratulated the winning teams and he extended thanks to all the attendants.
Firas Abu Mayaleh extended thanks to the participating nine teams, their boards, and technical committees. He commended the success of the championship and the support and sponsorship presented by NBC to the clubs and teams of Jerusalem. He thanked the technical committee of the championship which consists of coaches Gawwad El-Sabah and Mohamed Ibrahim El-Abbasi, the training and administrative cadre of the Academy, and international referee Amin El-Halabi who supervised all the matches.
On his part, Jehad Ewida, President of the Palestinian Academy for Martial Arts, commended the sports momentum in Jerusalem, especially football, whereas the Palestinian Football Talents Academy shouldered the responsibility of improving such sport and maintaining football players and developing their abilities. He asserted that such championships enhance the bonds among the clubs of Jerusalem and improve the game.
Amer Al-Qiq gave a speech on behalf of NBC and said: "I greet you from the beloved land of Beit Sfafa and I congratulate Al-Arabi Beit Sfafa team for winning the title, hoping that you and all the teams continue shining and winning with continuous training and hard work as well as looking forward to be the best all the time because Jerusalem deserves more efforts from its youth and people and from every loving Palestinian".
"This football tournament is organized as part of the summer campaign "Cheer & Win with Coca-Cola" which was launched by NBC to allow the Palestinian youth the opportunity to attend the UEFA Euro Quarter -Final scheduled to be held in France to meet the aspirations of football fans to be in the international playgrounds, follow-up the football championships and interact with them closely", added Al-Qiq. He added that NBC will cover the costs of a trip of five winners and their companions including the flight tickets and accommodation for three days.
He went on to say: "NBC is always keen to sponsor and support the sports sector in Palestine which embraces the biggest group of the youth and young people from both genders. NBC is also proud of the achievements of the Palestinian athletes in the local, Arab, and international sports record".
In the end of the ceremony, the cups and medals present by NBC were awarded to the first three winners. Al-Arabi Beit Sfafa team was awarded a special prize in the form of sports sets carrying the Coca-Cola logo. 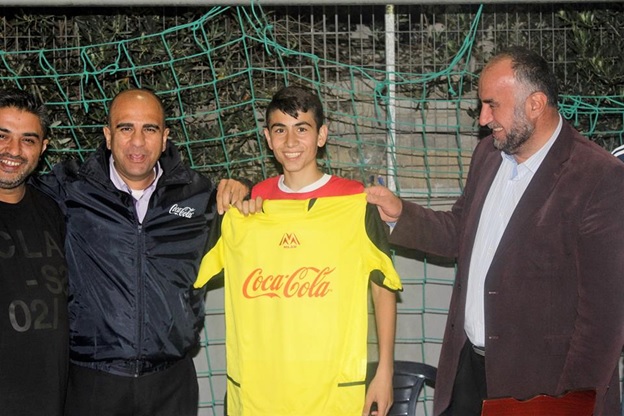 Finally, Firas Abu Mayaleh presented a special honorary a trophy to NBC and another trophy to the President of Al-Arabi Club, in addition to a third trophy to the international referee Amin El-Halabi, and a fourth trophy to Jehad Ewida, President of the Palestinian Academy for Martial Arts.