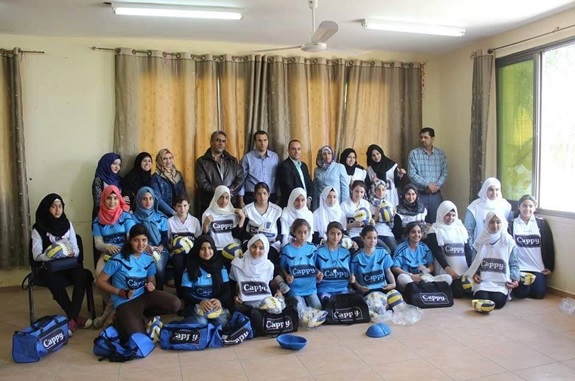 Ramallah - Alhayat Sports - The National Beverage Company Coca-Cola/Cappy (NBC) presented donations to the volleyball team of Zaweya Village Club.  NBC provided the Club Management with sports supplies and tools in addition to sports bags and sportswear in line with its continuous support presented by NBC to the young people sports teams affiliated to local clubs in the remote and marginalized areas.
The handover of the donation was made at the headquarters of Zaweya Sports Club in the presence of Alaa Esawi and Nihad Darwish, representatives of NBC Management, Ghassan Abdel Latif Nabaa, President of the Club, Hashem Amer, representative of the Higher Council for Youth & Sports, and Azmi Abdel Kerim, Manager of PR and Media at Abdel Kader Abu Nabaa Cultural Centre at Zaweya.
Mr. Imad al-Hindi, General Manager of NBC considered such support to the volleyball team of Zaweya village as one of the priorities of NBC in supporting the youth groups in all the Palestinian villages. He added: "NBC started supporting the club out of its confidence in the abilities of the young men and women in such areas and out of commitment to its responsibility to contribute to refining their skills, highlighting their ambitions, and helping them to participate in the local, Arab, and international championships."
Mr. al-Hindi commended the attention paid by the Club Management to the young age groups in addition to women emphasizing the continuous support provided by the company to the junior teams, especially the clubs that tend to include female players who proved aptitude in various sports as part of the strategy of NBC to achieve sustainable development for these groups in the less-privileged areas and seek to give the youth and children the opportunities they deserve.
In turn, Esawi praised the important role performed by the club to its male and female members and the village population which amounts to 8000 persons. He asserted NBC attention to assign all the sporting projects that aim at uplifting the level of skills and opportunities of participation at the local and Arab levels.
On his part, Ghassan Abdel Latif Nab’a valued NBC response to the needs of the volleyball team and its confidence in the club and the member players. He said: "We are honored to cooperate with NBC seeking to hold a permanent partnership with it". He indicated that earlier, NBC has sponsored the chess championship which was organized by the club. He affirmed that the support provided has significant moral aspects and entails a strong drive for the youth to develop themselves in order to engage in competition and represent Palestine at the Arab level.
Mr. Nab’a pointed out that the Club Management has recently created a women's volleyball team while it works on setting the foundation of a pioneer academy to teach volleyball in addition to a football academy to teach the males and females of the age group 12-14 years. He added: "The Club is specialized in the women sporting activities out of its faith in their abilities and due to the lack of sporting and community institutions that embrace such talents."