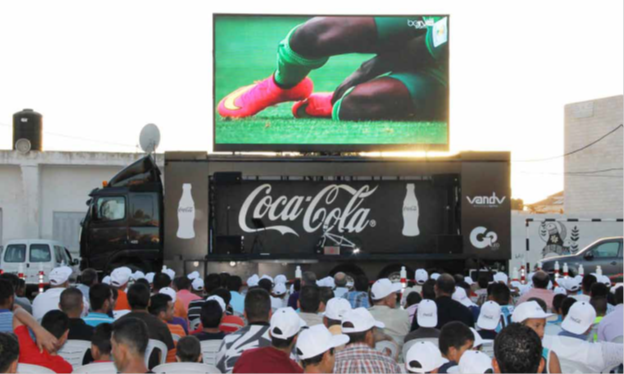 Coca-Cola GO LED Display Screen touring the Palestinian towns
Ramallah – Alayyam: As the round of 16 teams of World Cup 2014 started, the Coca-Cola Truck “GO LED” continued its tour in the Palestinian cities and villages to show World Cup matches in public and main squares to satisfy the large Palestinian audiences of World Cup matches. As competition between the leading international teams became fiercer, GO LED provided an exciting environment for the public to watch the matches for free through the final match.
The National Beverage Company Coca-Cola/Cappy (NBC) organized the tour using the Coca-Cola truck that was equipped with a large, clear, high-quality LED screen in an open atmosphere of joy, interaction, and entertainment. In addition to screening the matches, NBC presented a number of entertainment activities and give away valuable prizes to the audience.
A number of young people and the audiences of the World Cup matches in the various cities and villages have shown their appreciation of the initiative. They also praised the role of NBC in providing them with the opportunity to watch the matches for free, especially the qualified teams in the round of 16, given the international channels monopolizing the broadcasting of the matches for subscriptions, which the people cannot afford.
Mr. Imad Al-Hindi, General Manager of NBC confirmed that as competition between the teams became fiercer, the excitement of the Palestinian audience increased, especially the youth, to watch and support the competing teams. As a result, the NBC was keen to share their passion and provide the Palestinian public with exciting and free opportunities to watch the World Cup.
Mr. Al-Hindi explained that NBC is committed to its role as a leading sponsor of popular sports, especially football.  He added, “Our Company cares about the needs of the youth and their desire to enjoy time away from the difficulties they face in their life. Accordingly, we are committed to provide the youth with the opportunity to watch the exciting completion between the various world teams.” He indicated that the World Cup matches coincided with this year’s holy month of Ramadan. In this month, social occasions and meetings increase, so NBC was interested in sharing with the Palestinians their passion to watch the World Cup in a sociable and joyous atmosphere.
He expressed his happiness at the success of this round and its effect on the World Cup audiences in the Palestinian cities and villages. He signaled the role of the municipalities and village councils which cooperated with NBC and in providing and preparing the public squares, which contributed to the success of the Coca-Cola Truck, GO LED. He also praised the role of security authorities which helped maintain security during the screening of the matches.