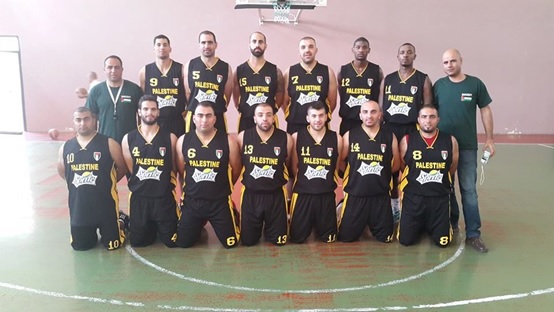 Ramallah - The National Beverage Company Coca-Cola/Cappy (NBC) announced that it was sponsoring Birzeit Basketball Team participating in the Arab Basketball Clubs Championship that was recently launched in the Kingdom of Morocco.
The Company undertook to contribute to the financial and logistic arrangements required for the team to travel to Morocco. Moreover, it provided the team with sportswear with the logo of Sprite, a product of the Company.
NBC General Manager, Mr. Imad al-Hindi confirmed that: "The NBC is keen to support the sports institutions and clubs in the various districts of Palestine, especially the clubs that demonstrate potentials and managed to develop the skills of their players".
He added that: "This supports comes in consistence with the vision and commitment of the Company to encourage the emerging and young sports team in the manner that contributes to creating a new generation of young people capable to distinguish themselves and compete, not only in the local arena but also at the Arabic and international levels and to prove to the whole world that Palestine is able to assume high positions in sports in spite of all the difficulties and challenges".
Mr. al-Hindi expressed his pride in the participation of Palestine in such an important championship at the Arabic region level.  He pointed to the achievement of Birzeit Club Team by winning the Première League Basketball Championship whereby it became qualified to represent Palestine in the Arab Basketball Clubs Championship.
Mr. al-Hindi praised the role of Birzeit Club in embracing the team and developing its basketball capabilities. "We are proud of having such teams like Birzeit Basketball Team in Palestine, which accomplished an important sports achievement despite of limited facilities and resources available. Now we can live such an achievement which culminated in extensive participation and competition in the Arab World", he added.
On his part, Boutros Abed, President of Birzeit Club pointed out that: "The achievement accomplished by Birzeit Club Basketball Team is certainly a proof of the Palestinians' ability to overcome the hard political and economic challenges and difficulties which could distract them away from pursuing their passion, achieving their aspirations and demonstrating their talents, especially in sports. We, in the club, hope that this participation would be an opportunity for the team to demonstrate their talents and potentials and achieve excellence among the participating Arabic teams and be the best representation for Palestine.
He added: "Thanks to the National Beverage Company Coca-Cola/Cappy for sponsoring the team and covering their travel costs to Morocco.  We, in Palestine, hope that all companies would follow the steps of the National Beverage Company Coca-Cola/Cappy and its example in terms of its efforts at the level of social responsibility and provision of sponsorship for all sports activities, events and young and emerging teams, which could contribute to the development of the various sectors of society and drive it towards a better future.”