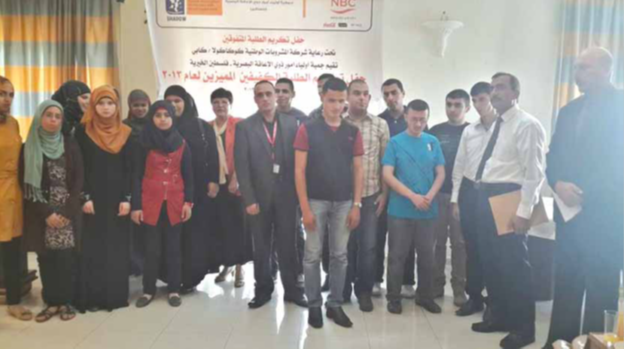 Students during the Event
Ramallah – Al-Hayat Economic - The National Beverage Company Coca-Cola/Cappy (NBC) sponsored a special ceremony to honor the blind high school students held by the Association of Parents of Persons with Visual Disabilities at the Retno Hotel in Ramallah. This initiative is intended to complement the several projects that NBC is supporting financially and morally, in particular projects targeting people with special needs and the Needy within its social corporate responsibility programs.
The ceremony was attended by Ms. Rima al-Kilani, Director of Mentoring and Special Education, as the representative of the Minister of Education and Higher Education; Dr. Ali Zaidan Abu Zuhri; Mr.  Nadim Mukhalafa, as the representative of the Federation of Teachers; Dr.  Abbas al-Masri, Chairman of the Association of Parents of Persons with Visual Disabilities and members of the Association, as well as Mr. Alaa al-Esawi as the representative of the National Beverage Company Coca-Cola /Cappy, sponsor of the event.
The Association of Parents of Persons with Visual Disabilities, based in Bethlehem, is concerned with providing social and psychological support to the people with visual disabilities, protecting and defending their fundamental rights, raising the awareness of the people on these rights and developing the ways to claim these rights. The Association is also concerned with protecting the visually impaired people from all kinds of abuse, monitoring and following up the services provided to them and working towards the improvement and upgrading of such services.
In his speech on behalf of the NBC on the occasion, Mr. Alaa al-Esawi, representative of NBC said, "The NBC aims always to build a robust structure for the education sector in Palestine, especially for people with special needs by providing material and moral support for them to integrate into the society and give them their human right to education on equal basis as their peers.”  He added that NBC would continue to support them until they reach what they aspire for and become active members in the community.
Mr. al-Esawi expressed his great pleasure to be present among the students who insisted to challenge all circumstances and have not surrendered to such circumstances.  He praised the great efforts they have exerted to reach success and excellence, wishing them further progress and prosperity in their academic and practical life.
On his part, Mr.  Imad al-Hindi, General Manager of the National Beverage Coca-Cola/Cappy explained that NBC sponsorship of the ceremony stemmed from NBC’s keenness to recognize and honor every hard worker against all odds.   He stressed that NBC is working hard to support the various projects that contribute to upgrading the community and supporting the educational process.
In her speech, Ms. Rima al-Kilani talked about the role of the Ministry of Education and Higher Education in the provision of Braille books for students with visual disabilities at equal basis like the books for other students. She also pointed out that the books are printed at a print house owned by the Ministry through a special department concerned with printing such books, as part of the Ministry's role in ensuring the right to education for all.  She also talked about the current efforts by the Ministry to adapt occupational education to the needs of students with visual disabilities to provide these students with the opportunity to depart from the typical specialties in their education.  She added that the Ministry was in the process of carrying out the final steps in the announcement of the national education plan for all students with visual disabilities.
On his part, Dr. Abbas al-Masri, Chairman of the Association expressed his thanks and gratitude to the National Beverage Company Coca – Cola/Cappy for the generous gesture, which reflects the profound attention given by NBC to the education sector in Palestine, especially education for those people with special needs.
Mr.  al-Masri stressed the importance of partnership with the private sector to provide support to people with special needs because of the capabilities and talents available among them, who if properly used can add more achievements.   He called for more attention to such marginalized group, pointing out that the blind students have contributed to a lot of activities and events along with their peers and they have demonstrated distinction. All people recognized them for their knowledge, talent and creativity.
It is worth mentioning that National Beverage Company Coca-Cola/Cappy has been providing a package of projects and sponsorships to support the education sector, especially for people with special needs, as part of its social corporate responsibility and to promote the social and humanitarian role of the Company.