Ramallah - Nisaa FM Radio Station and National Beverage Company Coca-Cola/Cappy (NBC) concluded the ‘For Her Because She Is Special’ project, which was launched last December and targeted 25 women from the West Bank and Jerusalem province.  The project aimed at empowering female entrepreneurs with small businesses; and has contributed as well to the promotion and marketing of their businesses. The project included the implementation of two training workshops, the production and broadcast of a radio program to introduce female entrepreneurs, as well as the production and broadcast of TV commercial clips to promote their businesses.
Rahma Zahran did not expect that her small home project would achieve such turnout. After she and a number of female entrepreneurs with small and home projects joined the ‘For Her Because She Is Special’ project, Zahran managed to expand and promote her project “Jannah for Food Products”. Demand for her products increased by citizens, merchants and institutions, and her pride in the achievement increased after the Agricultural Development Association contacted her in order to purchase her various products of Labneh with olive oil, pickles and other food products.
Zahran confirmed that she contributed to reducing the distance between the female entrepreneurs and specialists in the economy and business who are difficult to reach, allowing women to discuss the obstacles and challenges they face while implementing their projects.
Ola Daoud, who with her partner Fatima Zahalka manages the “Ola's Cake and Sweet Ideas Cake” project, said that her participation in the two training workshops, in addition to the advertising campaign and the radio program contributed to enabling her to develop her project and do good marketing of such project. This led to a growth in the customer base and an increase in sales and revenues. 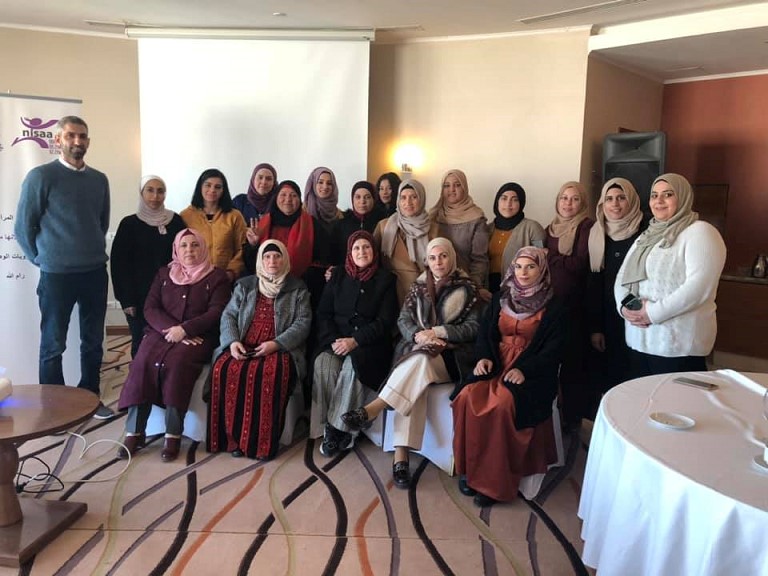 Amani Al-Ashal, Owner of the “Naba'a Alturath‎” project for handicrafts and heritage products, expressed her happiness to participate in the project, which allowed her to exchange knowledge and experience with the women participating in the project. It also enables her to develop her skills in work and do marketing for her project.
Baraa Khaled, who manages "The Art Box" project producing paintings with wood, screws and threads, believes that the advertising campaign that Nisaa FM produced and broadcasted under the sponsorship of NBC contributed to increasing the number of followers of her page on Facebook. The two training workshops also contributed to promoting her knowledge of marketing for the project.
On his turn, Mr. Imad al-Hindi, General Manager of NBC, confirmed that NBC was committed to supporting initiatives that aim at empowering female entrepreneurs, especially those who have small and home projects out of its belief that NBC should contribute to empowering women economically, especially in light of the deteriorating economic crisis due to the outbreak of coronavirus pandemic. Mr. al-Hindi appreciated Nisaa FM Radio Station's keenness to watch for the Palestinian woman's interests and achievements and its contribution to supporting and empowering women to handle difficult circumstances.
Mr. al-Hindi praised women's vigor and determination who launched and implemented creative ideas inspired by the Palestinian environment. He added, "we are always proud of what the Palestinian woman offers, especially her positive view of life despite challenges and drawbacks. Women reflect a model that we need to follow and be inspired by on how one can generate creativity and excellence from the hardships of suffering, regardless of the circumstances."
On her part, Maysoon Odeh, Co-Founder and General Manager of Nisaa FM radio station said, "We are very pleased with our partnership with NBC, and we strongly believe in the private sector partnership with the Palestinian media to bring about the required community change. This has been achieved and embodied in radio episodes, training workshops and the testimony of female entrepreneurs who talked about the success of their media and advertising experience."
With the support of NBC, Nisaa FM held two training workshops over the past months, aimed at developing marketing skills for female entrepreneurs benefiting from the project. The radio also produced promos and TV commercial spots that were broadcast to introduce projects and contact addresses to contribute to informing the audience and consumers of entrepreneurial projects that varied between food, sweets, Soap, artwork, craft products and more.