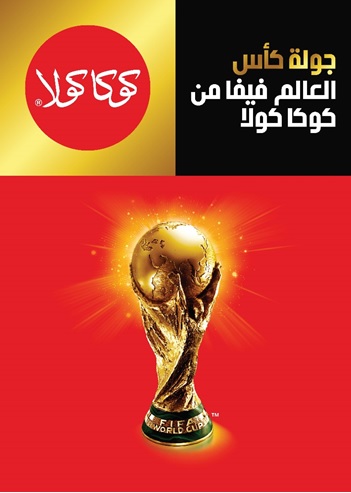 Ramallah- The National Beverage Company Coca-Cola/Cappy (NBC) is gearing up to host the original World Cup Trophy in Palestine as part of the activation tour of the 2018 FIFA World Cup which will be hosted in Russian next summer. This event comes in tandem with NBC celebrations of its 20th founding anniversary. Palestine will host the World Cup Trophy at the NBC’s headquarters at Beitunia during the period 17-19 February 2018, which is the longest period granted for the countries to host the World Cup Trophy. Further, Palestine will be the first Arab country to receive the tour.
Mr. Zahi Khouri, Chairman of NBC Board of Directors, pointed out that NBC will host the World Cup Trophy for 3 days, which is the longest period worldwide. He added that NBC Board of Directors is proud of such international privilege which arises from the distinguished performance of the company and the premium quality of its products which live up to its consumers’ expectations.
Mr. Khouri said he is confident that the hosting of the World Cup Trophy in Palestine for the second time will be wonderfully organized, thanks to the efforts of the management of NBC and its staff. He emphasized that NBC is keen to remain a partner in the journey of the upgrade and development of the sports sector in Palestine, against all odds.
On his part, Mr. Imad al-Hindi, General Manager of NBC, indicated that a special website will be launched to allow the fans of the sports and the World Cup to register their information so that they participate in a draw to take a memorial photo with the World Cup Trophy.  He noted that thousands of participants will have the opportunity to take memorial photos. He added: “Just as NBC has the tradition of engaging the youth and children in its society in the heart of the sports events and bringing them as close as possible to the thrilling atmosphere, it will provide this opportunity again by organizing a number of activities and events to meet the World Cup Trophy, which is the grand prize pursued by the international teams in the World Cup finals”.
Mr. al-Hindi affirmed that the passion of the Palestinian society about the different sports, especially football, was translated into real successes and achievements. Recently, the local individual and group sports saw remarkable developments and put Palestine in a distinguished position on the sports map and it was selected among more than 50 countries to host the World Cup Trophy. Further, the World Cup Trophy will take off from Palestine making its way around the Arab region.
The historical tour of the World Cup Trophy will kick off this month and it will land in more than 50 countries across 6 continents, including the countries which hosted the World Cup Championships. The tour will take 123 days then the trophy will land in Russia in May, one month before the 2018 World Cup Championship.
Five years ago, NBC has won the title of the “Best FIFA World Cup Trophy Tour Activation” as part of the Global Marketing & Commercial Excellence Awards after hosting the World Cup Trophy in Palestine in 2013 for one and a half days.