In cooperation between INJAZ Palestine and NBC, Melody of Happiness of Birzeit University ranks first in Ripples of Happiness Program 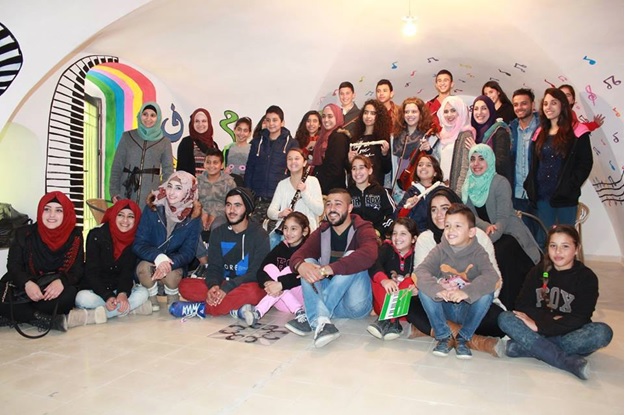 Ramallah – Alayyam:  The students team of Birzeit University named Melody of Happiness attained the first position in the 8th phase of Ripples of Happiness Program, which  is a training program implemented in cooperation between INJAZ Palestine Foundation and the National Beverage Company Coca-Cola/ Cappy (NBC) and funded by Coca-Cola foundation. The program aims at promoting the social responsibility of university students to make a positive change in their local communities.
Melody of Happiness team, which comprises 29 students from different colleges, has competed with 22 teams from 6 Arab states.  The team received a financial grant of Ten Thousand US Dollars to finance and expand their project, which receives training from Hassan Karaja, PR and Training Manager of Jerusalem Pharmaceuticals Company, with a view to build a Music Education Center for children in the village of Safa in Ramallah and Al-Bireh Governorate.
Afaf Shakarneh, one of the participants in the project, expressed her happiness with her colleagues of such achievement which seeks to serve a large group of the society. About the idea of the project, she said that they wanted to focus on music and art and they chose Safa village for being surrounded with seven villages and it is relatively remote from the city center where music centers that train children for fees are located. Therefore, they came up with the idea of establishing a free charity center for music lovers who have the passion to learn music and revive the national heritage.
She added: “We renovated Hanzalah Center which is located in the village and we outfit it to meet the project requirements in terms of providing the simple tools such as violins and flutes. Trainers from Birzeit University students volunteered to develop the musical sense, promote awareness about the cultural aspect, and scout the musical talents of the children”.
Mohamed El-Ahmed, Dean of the Student Affairs at Birzeit University, congratulated the students for such achievement noting that: “every year Palestine harvests high ranks at INJAZ program at the Arab region level which indicates the competence and ability of the Palestinian youth to serve their communities and their persistence to change them for the better.”
He added: “We have faith in the positive potentials of Birzeit University students and we seek to unleash their innovations capable of capturing the gaps in the society and effectively responding to them to bridge them by coming up with pioneering projects that improve the social and cultural life standard”.