Supported by National Beverage Company Coca-Cola/Cappy, A Recreational Day for Children with Thalassemia and Hemophilia at Nablus 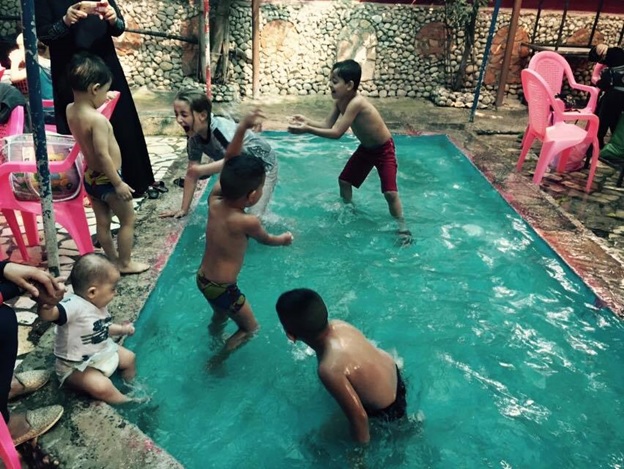 Nablus- "Alayyam": The Social Workers and Psychologists Association, Nablus branch, in partnership with the Health Education and Awareness Department of Nablus Health Directorate, and in cooperation with the Association of Thalassemia Patients Friends and the Palestinian Hemophilia Diseases Association, with support from National Beverage Company Coca-Cola/Cappy (NBC), organized a recreational and educational event for children with various blood diseases, especially hemophilia, thalassemia, and sickle cell anemia.  Thirty six children with hemophilia and thalassemia and their mothers from the city of Nablus and its villages took part in the recreational day which was organized at Palestine Park at Al-Badhan area.
The event was attended by Randa Maqboul, President of Social Workers and Psychologists Association; Ahmed Samaaneh, Head of Health Education Department at Nablus Health Directorate; Dr. Abdul Nasser Dharaghmeh, Activist at the Association of Thalassemia Patients Friends; Ahmed Atallah, Psychologist at the Health Directorate; a team of specialists and staff from the Association, and nursing staff from the Health Directorate.
The event included interactive activities to help the children to get psychologically relieved, in addition to swimming and electronic games. Further, healthy breakfast and lunch, Cappy juices and Jericho water were presented.
Maqboul said: "This event aims at helping children with thalassemia and hemophilia to freely express their emotions and enhance their spirits.  Also, this event provides the opportunity to train the specialists team on methods of dealing with this group of sick children, in addition to boosting the relationship between the Social Workers and Psychologists Association and the Ministry of Health, as well as intensifying the efforts to support such groups and taking advantage of this opportunity to network among the national and nongovernmental institutions to support the patients of hemophilia and thalassemia".  Maqboul commended the NBC's continuous support to the children with blood diseases in Palestine.
On his part, Mr. Imad al-Hindi, General Manager of NBC said: "During the past years, NBC has been committed to sponsor such activities aiming at alleviating the suffering of patients of blood diseases, especially thalassemia and hemophilia patients. NBC has also supported the efforts of raising awareness about such diseases in the society as part of our programs that support the health sector. We will continue this partnership to raise awareness about the diseases and alleviate the suffering of the patients, especially the children who are in a pressing need for such type of activities that help them face the disease with a smile and joy".
Mr. al-Hindi valued the efforts made by the Ministry of Health, the Syndicate of Social Workers and Psychologists, Association of Friends of Thalassemia Patients, the Palestinian Association of Hemophilia Diseases, and all the competent and interested bodies to help sick children who need care and attention to alleviate their pains.
On his part, Samaana said: "we organize this recreational day for children with thalassemia and hemophilia with the objective of integrating the sick children with their community and environment and engaging the governmental and nongovernmental institutions and sectors to alleviate the suffering of blood disease patients, while focusing on the children by adopting recreational and discharge approaches. This event further contributes to providing sound environment for meetings, introduction, and exchange of experiences among the concerned entities and specialists to work on improving the health condition of the patients in addition to the importance of improving awareness about the disease".
He indicated the importance of networking with the union, nongovernmental, private, and public institutions and continuing efforts to achieve the objectives aspired in the plans and programs set under the five-year plans of the Ministry of Health in relation to blood diseases and patient care. He valued the attention paid by NBC to support patients of thalassemia and hemophilia.
Regarding the effect of such event on children with thalassemia and hemophilia, Dauragma said: “it is extremely important to organize this event regularly, especially for this age group of children with blood diseases, which facilitates the mission of psychologists, physicians, and parents to alleviate the suffering of children in the first place and to contribute to the success of treatment interventions needed for these children. Once children can handle such diseases psychologically, they will better respond to treatments, and this is our goal”.
He stressed the importance of providing the sound and appropriate environment that brings sick children together with their families. “These events help children discharge and let off steam in a convenient and open atmosphere which improves their abilities to interact and get better”.