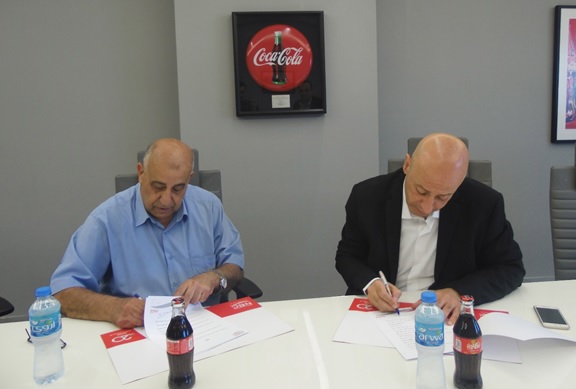 Beitunia – Alayyam: The National Beverage Company Coca-Cola/Cappy (NBC), represented by Mr. Imad al-Hindi, General Manager of NBC, and Al Bireh Cultural Club, represented by its President, Mr. Dawood Metwali, signed an agreement in NBC Head Office in Beitunia to renew the sponsorship of the Female’s Fencing Team for the fourth consecutive year.
Mr. al-Hindi expressed happiness for sponsoring the Female’s Fencing Team of Al Bireh Cultural Club for the fifth year in a row. “We are proud of sponsoring and supporting the Female’s Fencing Team, in line with the corporate social responsibility of NBC and its belief in the importance of developing athletic talents in Palestine, especially women teams and their right to have access to equal training and competition opportunities as the men”, said Mr. al-Hindi.
Mr. al-Hindi commended the Female’s Fencing Team for their consecutive successes throughout the past years and achieving honorable results in the championships. He valued the efforts of the Club Management in following up and enabling the potentials of the team to maintain their standard against the competing teams. Further, the Management is dedicated to provide diverse programs to the employees and members of the Club which range between sporting, cultural, and community programs.
Mr. al-Hindi confirmed that NBC is dedicated to continue supporting all the sporting clubs in Palestine, especially those which provide training programs for the youth and seek to develop their potentials. He called upon all the companies to contribute in supporting such initiatives and activities, especially amidst the rising rates of unemployed graduates due to the hard economic conditions.
On his part, Metwali valued the role played by NBC in continuing its support of Al Bireh Cultural Club and renewing the sponsorship of the Female’s Fencing Team this year.  He considered NBC a strategic partner which supports various youth activities and initiatives targeting both genders.
Metwali added that sponsoring of the Female’s Fencing Team by NBC is a significant incentive for the Fencing Team to continue and progress, especially during the championships which the team participated in at the Arab and Asian levels and winning of many golden, silver, and bronze medals and our leading position at the local level.
On the sidelines of the agreement signing event, Metwali awarded Mr. al-Hindi and Mr. Alaa Eissawi a recognition trophy for the continuous efforts of NBC to support the sporting programs in the Club in particular, and supporting the sporting activities in the clubs in general.