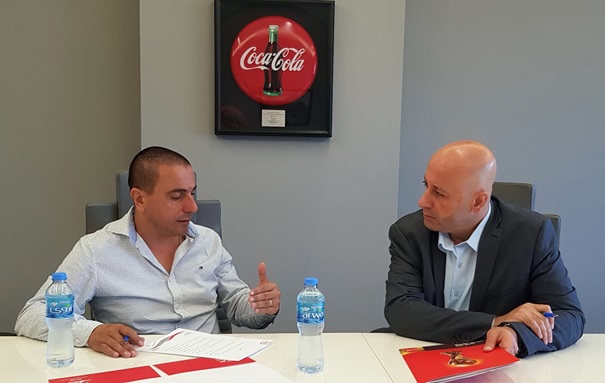 Beitunia - The National Beverage Company Coca-Cola/Cappy provided sponsorship to the Squash Academy of the Young Men's Christian Association (YMCA) in Jerusalem by providing a range of sports supplies and equipment, as well as the uniform sportswear with Cappy logo.
The Sponsorship Agreement was signed at NBC headquarters in the presence of Mr. Imad al-Hindi, General Manager of the Company, Andrea Bahbah, Director General of the Community and Sports Center of YMCA, and Alaa Esawi, Technical Coordinator of the National Beverage Company.
The Squash Academy targets the 4 to 12 years age categories.  Children from Jerusalem and its suburbs are trained free of charge, by a group of veteran and skilled trainers, headed by Abdul Hamid Abu Rumaila, the Palestinian Champion in squash.
During the signing ceremony, Mr. Imad al-Hindi emphasized the uniqueness of Jerusalem and the keenness of NBC management to support centers and institutions that provide community, sports and recreational services for the Jerusalemite community. He expressed his pride in the long-term partnership between the Company and YMCA, which has been operating in Palestine for more than 70 years, and has significantly and effectively contributed in the establishment of collective games and the propagation of sports culture in society, especially among the junior and young age groups for both genders.
Mr. al-Hindi wished success and continuity of the Squash Academy and praised the efforts exerted by YMCA to develop this game, in addition to organizing free training courses for children. He also expressed his hope that the sponsorship of NBC will contribute to the provision of training requirements and the players' needs and in creation of a suitable sports and health environment for the children of Jerusalem.
On his part, Andrea Bahbah thanks the management of NBC, stressing the strength of the historic partnership between the two parties and added: "We are much honored to have gained the sponsorship of the Company to complete the establishment of the Squash Academy. YMCA has the only squash court in Jerusalem. This support will help us purchase the sports equipment for training and sportswear for players, which are high-cost and expensive."
Bahbah stressed that YMCA management worked to establish the Squash Academy in addition the basketball and table tennis academies in order to transfer this game to the younger age groups and the younger generation. He pointed out that the Academy includes about 70 children so far. YMCA decided to organize training courses free of charge for children considering the financial distress experienced by some Jerusalem families, especially in the neighborhoods of Jerusalem and its environs, and to alleviate the psychological pressures suffered by children due to lack of play yards in the city.