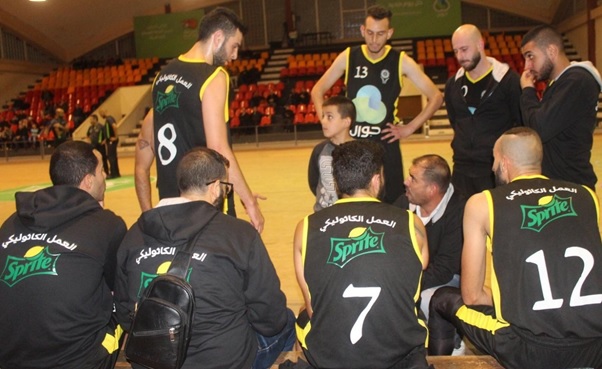 Beitunia: The National Beverage Company Coca-Cola/Cappy (NBC) provided the uniforms for the Bethlehem Catholic Action Basketball Team, bearing the logo of "Sprite" during the quarterfinals of the Premiere League.
Mr. Imad al-Hindi, General Manager of NBC expressed his appreciation and pleasure to keep on supporting the national basketball teams within long-standing institutions and clubs in the sports sector and social work area.  He further emphasized that NBC is giving priority to embrace sports games, especially team games and enabling players to continue developing their outstanding ability to compete at national and regional levels.
"We are pleased with our cooperation with Catholic Action Club, wishing that this becomes a good start of a long fruitful collaboration.  I also wish the best of luck for the Catholic Team that has achieved good results in the Premiere League, as well as for all the participating basketball teams", he added.
Mr. al-Hindi commended the distinguished results achieved by the national basketball teams and the pleasant matches they have presented during the league, underlining the high level of national performance in this game. He also called on all companies and private sector entities to continue their support to the Palestinian sport teams and enabling Palestinian youth to hone their skills.
On his part, Hussam Wahab, Head of the Catholic Action Center, expressed his gratitude and appreciation, for himself and on behalf of the management, to NBC for its continued support to the Palestinian sports, wishing that other companies would stand up to their social responsibilities by supporting all the sports teams.
Mr. Wahab emphasized that supporting national teams, especially those embracing sports academies such as Catholic Action Center will help develop the sense of belonging in a generation that appreciate sports.  He wishes that the youth in the Catholic Action Center would develop their abilities in achieving positive results in the Premiere League. "We are in a dire need to follow NBC steps in supporting national sports", he added.