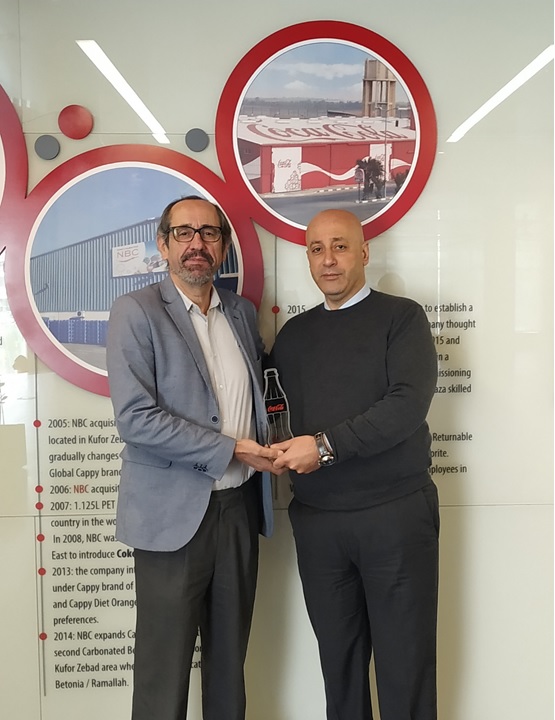 Ramallah – Al Hayyat Economic - In another achievement to be added to the ones achieved by National Beverage Company Coca-Cola/Cappy (NBC), the Coca-Cola Plant in Gaza earned the Coca-Cola Award at the Middle East and North Africa level for its excellent performance in achieving the production plans during the past year despite of the challenges facing the Industrial Sector in the Gaza Strip.
The Award was announced during the celebration of Coca-Cola Global for the distribution of the first Annual Supply Chain and Productivity Awards, in which outstanding performance in 2018 by Coca-Cola partners and suppliers in the Middle East and North Africa region were honored.
The Coca-Cola Plant in Gaza achieved the highest standards for its performance in 2018 as per the performance assessment criteria. The assessment was made under the supervision of a specialized committee comprising representatives of Coca-Cola Global as well as international experts.  This is the first award attained by the Coca-Cola Plant in Gaza for the outstanding level of its performance since its establishment in 2016 at a total cost of about US $ 20 million.   The Coca-Cola Plant in Gaza today provides 120 direct jobs and about 1200 indirect jobs including suppliers, distributors and retailers.
Commenting on this achievement, Imad al-Hindi, General Manager of NBC congratulated all employees of the Coca-Cola Plant in Gaza for the achievement, and praised their dedication and devotion to work in spite of the challenging economic conditions which the Gaza Strip suffers in general, and the challenges encountering the Industrial Sector in Gaza in particular.
With regard to the entitlement of Gaza Coca-Cola Plant to win the Award for excellent performance, Mr. al-Hindi added; “This award is a clear indicator of the successful Palestinian investment model, which depicts the determination and will of the Board of Directors and the Executive Management as well as the resolve of the employees and workers in the plant. It also reflects their commitment to performance and excellence standards as well as to overcoming challenges in order to achieve the desired objective of providing high-quality international products by the Palestinians themselves in the Gaza Strip; thus, contributing to promote the local economy despite of the difficult conditions, and providing thousands of direct and indirect employment opportunities that in turn contribute to facing the growing unemployment problem in the Gaza Strip”.
Mr. al-Hindi    also expressed his happiness and pride that the Gaza Coca-Cola Plant received the 2018 Coca-Cola Award for Excellent Performance in the Middle East and North Africa, in spite of the exceptional difficult circumstances under which the employees and workers perform in the Plant. Adding that this achievement is a proof of accomplishment and giving ability of Palestinian people despite all the challenges and difficulties, which is a lever for further giving and excellence in the coming years in order to promote the Palestinian economy and support the community in facing poverty and unemployment problems.
Mr. al-Hindi pointed out that NBC, from the very beginning, has been keen to provide high quality products to the Palestinian consumer in all governorates of the country. Furthermore, the company follows the international and Palestinian quality standards in the various stages of production and packaging to provide the best national product for the Palestinian consumer.
The National Beverage Company Coca-Cola/Cappy is the third largest operator in Palestine with its approximately 850 employees
of direct jobs in all governorates of the country, in addition to about 8,500 indirect jobs across Palestine.

The Award is added to a group of awards attained by NBC since its establishment 21 years ago for its outstanding performance and compliance with quality, environment and public safety standards. Ramallah Plant won the Coca-Cola Middle East Gold Award in 2013, 2014 and 2015 consecutively. NBC also earned first place in the Sustainable Development Award among Coca-Cola subsidiaries in Eurasia and Africa in 2011 and 2013 and the second place of the same competition in 2014.  In addition, NBC won the Community Empowerment Award for 2013. The Coca-Cola Plant in Ramallah was selected as the best plant applying environmental regulations in 2011 and 2015, and was ranked first in sales and marketing among Coca-Cola subsidiaries in the Middle East.