In cooperation with the Ministry of Education, "Smile of Hope" and "Hasad Al Kheir" Foundations, National Beverage Company donates more than 6000 school bags to students in the West Bank and Gaza Strip within the "Back to School 2017" Campaign 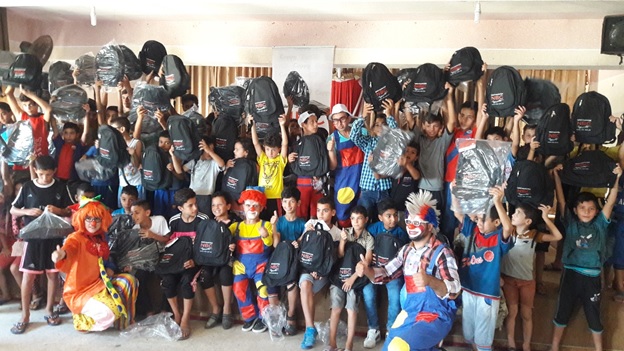 Ramallah-Gaza - Al Hayat Economic:  The National Beverage Company Coca-Cola/Cappy (NBC) has distributed over 6000 school bags in the governorates of Gaza and the West Bank governorates as part of the annual “Back to School 2017” Campaign implemented in cooperation with the Ministry of Education and Higher Education, Smile of Hope to Care for Cancer Patients Care, and Hasad Al Khair Foundation in Gaza. During this year, 3000 school bags were distributed to students of all the West Bank Educational Directorates, and another 3000 school bags were distributed to the sick and orphan students in Gaza Strip.
More school bags were distributed to many societies and charities in the West Bank. The school bags were distributed in cooperation and partnership with all the educational directorates in the West Bank's governorates. As for Gaza, the school bags were distributed in cooperation with the following entities: Palestine Future for Childhood Foundation, particularly children with cerebral palsy, Al-Amal Institute for Orphans, Dr. Abdul Aziz Al Rantisi Hospital, Muhammad Al-Durrah Hospital, Thalassemia Patient Friends Society,  the Palestinian Society For Cancer Care, Milad Al-Hayat Association, Makhathir Deir El Balah Society, Shifa Society for Cancer Patients, Ataa Bila Hodood (Giving Without Limit) Association, and Palestine Pioneers Association.
On his part, the Minister of Education and Higher Education, Sabri Saidam, commended the positive and honorable role played by NBC, at the same time every year. He also praised its constant cooperation with the Ministry by providing both financial and moral support for several educational and cooperative programs with a view to reduce the burdens sustained by Palestinian students, especially under the harsh economic conditions they are experiencing. Saidam believes that this project represents the principle of effective partnership between the Ministry and NBC based on social responsibility, serves the educational sector, and develops education, especially in remote areas known as (C Zone). In the same context, Saidam called all organizations of the various sectors to strengthen their partnership with the Ministry and contribute to the provision of education services, being the basis for community development and for achieving comprehensive and sustainable development.
NBC General Manager, Imad al-Hindi, said that the Company's management takes pride and pleasure that distributing the school bags to Gaza and the West Bank students was done successfully; it has become an annual tradition as it creates an atmosphere of joy and happiness amidst the harsh life of these sick and orphaned children, especially those whose families refuse asking for donations. The campaign aims at smooth and sound integration of these students with their peers, in accordance with the principle of Education for All and with NBC social responsibility towards the people of Gaza and West Bank.
This is particularly importantfor less fortunate childrenwho suffer fromillness and deprivation;it is a step that aims at breakingeconomic and health boundariesthat may prevent these childrenfrom completing their educationaljourneyفHasad Al Khei r foundation. nd, an indispensable aspect of any decent life.  Al-Hindi also commended the continued and constructive cooperation and partnership between NBC and the Ministry, represented by His Excellency the Minister Sabri Saidam; as the ministry has been always keen to provide logistical support in the process of school bags distribution. It focuses on continuing the process of education development in Palestine, aiding the sick and poor students to eliminate the social, economic and physical differences between students, and instilling a spirit of hope and love of knowledge in their hearts. Moreover, al-Hindi also thanked Smile of Hope and Hasad Al Khair Foundations, as well as all partner foundations in Gaza for their cooperation and active partnership in this initiative by distributing school bags and organizing entertainment shows for the children. Those foundations exert tremendous and continued efforts to contribute to improving the lives of orphan children and cancer patients’ psychological and environmental conditions.
Mr. Sami Al Jojo, the general coordinator of Smile of Hope Foundation expressed the thanks to the annual NBC's initiative of distributing school bags to Gaza children who are suffering hard conditions and for its efforts to spread love and joy ahead of the start of the school year and Eid al-Adha. He explained that the school bags were distributed among many charities and social foundations in Khan Yunis, Deir Al-Balah, Jabalia, Beit Hanoun, and Gaza's middle governorates. In addition, Al Jogo indicated that the cooperation between his foundation and NBC initiative this year was accompanied with a show of clowns who performed before children as a pleasant present from NBC. He also reiterated his appreciation for NBC previous initiative in the Gaza, which aimed at integrating cancer patients in campaign to distribute beverages to households. Finally, he hoped for the continuation of such efforts to mainstream children and adult cancer patients into the society and save them from isolation and illness.