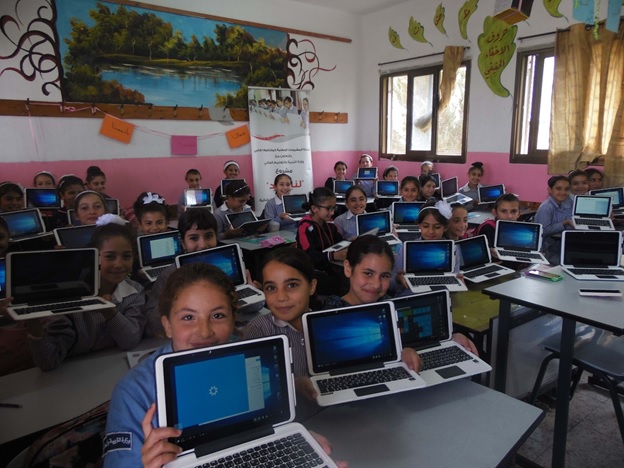 Ramallah- Al Hayat Economic - The Ministry of Education and Higher Education (MOE) and the National Beverage Company Coca-Cola/Cappy (NBC) announced the end of the 11th phase of the Computerization of Schools Project "Lana Alghad" (Tomorrow Is Ours) by the distribution of 100 Educational 2 in 1 Detachable Tablets to Siris Girls' Elementary School affiliated to the Qabatiya Directorate,  Al-Andalus Elementary Girls School in the Southern Hebron Municipality, 50 tablets per school. This project comes within the framework of the cooperation between the Ministry and the Company aiming at the development of the Education Sector and providing the schools with the latest electronic educational means.
The Minister of Education and Higher Education, Dr. Sabri Sidem, said that the Ministry was keen to strengthen its partnership with all the supporters of the educational process, especially the National Beverage Company, in line with its strategic trends and plans to serve the digitization program of the public education.  He pointed out the importance of establishing sustainable partnerships with the Private Sector in order to serve the Education Process and the formation of future generations using the latest technology of educational programs and applications.
The General Manger of the National Beverage Company, Mr. Imad al-Hindi, said that the partnership with the Ministry of Education and Higher Education was formed in the framework of the development of the educational and educational system and the integration of modern teaching methods in order to cope with digital applications that fit the spirit of the times.  It is a creative partnership that plays a key role in raising the level of education in our schools, including the enhancement of the mental and intellectual potentials of our students and enabling them to keep pace with their peers in the world and to benefit from the rapid technological development in the proper and desired manner.  He commended the efforts of the ministry staff and their continued cooperation with the Company to implement Lana Alghad project “Tomorrow Is Ours project”.
Mr. Imad al-Hindi also stressed NBC's commitment to the development of schools especially in remote areas; and will actively support all schools in the different regions and governorates within the School Computerization Program,  He underlined the importance of private sector institutions playing their role in the Education Sector and the other various sectors to support the government institutions and bodies in completing the process of progress, construction and sustainable development
Lana Alghad “Tomorrow Is Ours” project, which started in 2007 with a partnership between the National Beverage Company and the Ministry of Education and Higher Education, included the distribution of 618 tablets and 335 computers to dozens of schools in the Education Directorates of the West Bank, in addition to the commissioning of 39 school computer labs.