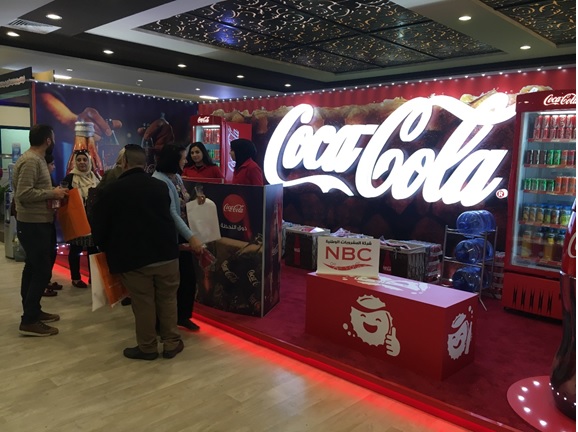 Al-Bireh- Alhayat Economics- The National Beverage Company Coca-Cola/Cappy (NBC) has remarkably participated in the Palestinian Food Exhibition, Ghetha’ona “Our Food” 2017, which was organized under the patronage of Rami Hamdallah, Palestinian Prime Minister.  A various group of local industrial and food companies have also participated in the event held in the halls of Muntazah Al-Bireh in Ramallah and Al-Bireh Governorate during the period 6-8 November.
NBC’s stand received high attention by the visitors of the exhibition and it presented a range of NBC’s signature products of sparkling beverages, Cappy natural juices, and mineral water. The visitors commended NBC’s pavilion and its high quality products.
Mr. Imad al-Hindi, General Manager of NBC, said that NBC takes pride in regularly participating in the food industries exhibitions and he affirmed that such exhibition helps the companies to outreach the people and receive first-hand  feedback and learn the consumer satisfaction level in line with NBC’s approach to be present and actively participate in different activities and events which would further familiarize the people with the national product with the objective of promoting and increasing its market share, in addition to developing the Palestinian industrial sector, especially that the Palestinian products have lived up to the competition in the international markets.
Mr. al-Hindi also indicated that NBC’s adherence with the international quality standards and to provide the Palestinian consumer with the best products by applying the highest international specifications would enhance the consumer’s confidence in its products which will contribute to developing the national economy and improving the local companies’ ability to compete with the other products in the markets. He noted the outstanding competence and performance of the staff working in NBC and its multiple factories, indicating that their persistence is an important factor to maintain a premium level of quality and productivity.
Mr. al-Hindi valued the efforts of the entities responsible for holding and sponsoring the exhibition, especially Mr. Bassam Walweel, Chairman of Palestinian Federation of Industries, and the exhibition preparatory committee. Mr. al-Hindi noted the outstanding organization and applauded the high traffic received by the exhibition which reflects the people’s regard to encourage the national products and local industries which provide the market with high quality which are made by pure Palestinian hands.
Mr. al-Hindi pointed out that this time NBC did not have an opportunity to take part in the food industries exhibition in Gaza, held in parallel with the exhibition held in Al-Bireh. He hoped that NBC can participate in the upcoming exhibitions and events in Gaza.
Ghetha’ona “Our Food” 2017, which was organized by the Palestinian Federation of Industries in cooperation with the Palestinian Food Industries Union and professional federations, has come to an end with the participation of 100 national companies and thousands of visitors.