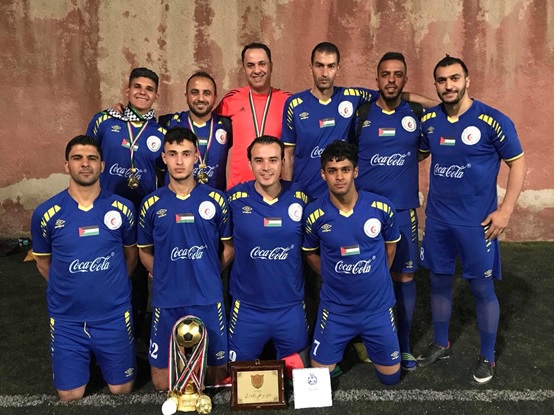 Betounia - Al-Hayat Sports: The National Beverage Company Coca-Cola/Cappy (NBC) sponsored the participation of the Team of the Palestinian Nurses & Midwives Association (PNMA) in the Arab Independence Championship, which is the first Arab Independence Championship in quintet football tournament organized last week on playgrounds of Yarmouk Club in the Hashemite Kingdom of Jordan by Jordan Customs Club to mark the Independence Day. The Participation of PNMA Team resulted in the Team winning the Championship’s title.
Mr. Imad al-Hindi, General Manager of NBC, expressed his pride of the accomplishment of the Palestinian Nurses & Midwives Council's Team; and congratulated the Team and the Management of PNMA and all their members for such success.
NBC support to the participation of the PNMA Team was an integral part of the Company's cognition of its significant role and social responsibilities towards the local community and its social and institutions, according to Mr. al-Hindi.
He confirmed that NBC is committed to provide support and to work in responsible partnership to assist and support the associations, NGOs, and civil and social institutions in order to empower them to provide their services to the local community. In addition, the Company is keen to promote the sports activities in a manner to contribute to stimulate the role of the national institutions locally and regionally.
On his part, Mr. Ayman Lobad, Sports Committee Officer in the Palestinian Nurses & Midwives Association that the PNMA Team participated in the First Arab Independence Championship under a commendable sponsorship by NBC that has supported the PNMA in its regional mission.
On his own behalf and on behalf of PNMA president and members, Mr. Lobad thanked NBC for its sponsorship of the PNMA football team, the winner in the First Arab Championship.
Mr. Lobad noted that the PNMA Team won the title of the Winter Jericho Championship of this year, in which many Arab teams from Jordan, Syria, Iraq and Palestine participated. He added that the Nursing Team has participated in many fruitful matches which placed the team in the lead to attain the title after winning the Syrian Community Team, the runner-up in the Championship.