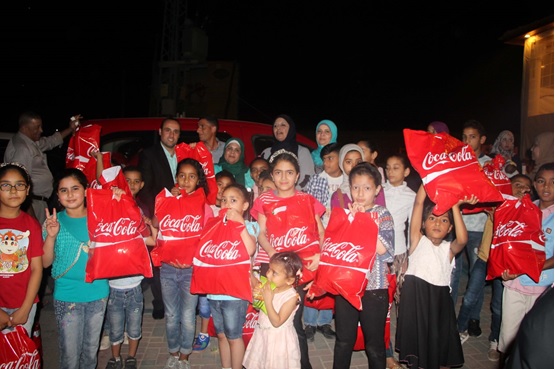 Beitunia – The National Beverage Company Coca-Cola/Cappy (NBC) sponsored a number of Iftar banquets during the Holy Month of Ramadan, organized in cooperation with various associations and charities caring for orphans in the West Bank provinces. The events came as a part of the Ramadan banquets organized by NBC every year for hundreds of orphans in the West Bank and the Gaza Strip.
More than 500 orphans attended the banquets along with their surrogate mothers, guardians, and escorts. Such efforts have been made in cooperation withthe IsraaCharitable Society for Orphans in Jericho, the Islamic Charity, Beit Ula branch, at Hebron province, and Madeed Center for guidance and mental health in Nablus.
Mr. Imad al-Hindi, General Manager of NBC, confirmed that sponsoring such Ramadan banquets for hundreds of orphans by NBC is in line with its endeavor to honor the values of solidarity and brotherliness in the Holy Month, giving orphans a chance to experience joy, happiness and family bonds they have been deprived of. "We are happy to share those children the blessing of Ramadan gatherings, and to extend a merciful hand to them all the time and everywhere," he added. He also pointed out that NBC is specifically interested in providing due care for the underprivileged groups in the society. Therefore, it works hard to reach out to the orphans or those who are living in hard conditions across West Bank and Gaza Strip to give them a hand of help, and to support the institutions and centers that care for and embrace them, so that they can live a normal life and overcome all challenges and tough conditions.
On his part, Shaker Jalaita, Director of Israa Charitable Society for Orphans, thanked NBC top management and its staff for their continuous cooperation through years to make the arrangements of such events, and working with the charity in many other occasions. Jalaita indicated that 150 orphans inhabiting the aforementioned society shared the same banquet held in Al-Sultana Restaurant in Jericho.
Shahir Sraheen, the Islamic Charity, Beit Ula branch, appreciated the special arrangements of the event sponsored by NBC and held at the headquarter of the charity, serving more than 500 orphans from five villages in Hebron: Tarqumiyah, Nuba, Kharas, Hittah, and Beit Ula. Attended by about 200 persons including the orphans, their guardians, and relatives, the event, as indicated by Sraheen, has attained the desired goal, i.e. engaging as many as possible of children bringing them joy and happiness.
Sraheen has thanked, personally and on behalf of all the employees, NBC for its kind gesture in the holy month of Ramadan.
On his part, Ahmed Dwikat, Director of Madeed Center for guidance and mental health in Nablus, stressed the importance of breaking the daily routine of the orphans, giving them the opportunity to attend Ramadan events and banquets outside the center. He also praised the special Iftar banquet held under the auspices of NBC at Kan Ya Makan Restaurant at Nablus, which was attended by 150 orphans together with their surrogate mothers. He also thanked the NBC top management.
Dwikat added that the smiles have appeared on the faces of the children and their surrogate mothers especially after getting gifts presented by NBC staff, which has a positive effect on the children.
In addition, NBC Coca-Cola/Cappy sponsored another banquet last week at Gaza Strip, attended by more than 320 orphans, in cooperation with Hasad al Khair Charity for Orphans, and Mabarrah al-Rahma for children.