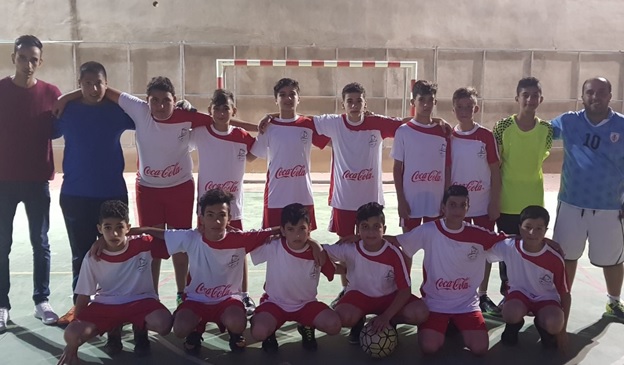 Ramallah - Under the exclusive sponsorship of the National Beverage Company Coca-Cola/ Cappy (NBC), Al Ersal Sport Club organize next Friday  the Future Stars Championship of the Football Sexpartite tournament for the age group 2004 - 2005.
The Championship events will be organized on the stadium of Al Najah School in Al Bireh with the participation of eight teams is scheduled including Al Ersal Club, Club of Al Bireh Youth Association, Al Bireh Cultural Club, Kafr Neama Club, Al Shurfa and Sateh Marahaba Club, Ramallah Islamic Club, Ramallah Academy Club and Jabaa Club.
The participating teams were divided into two groups; the first group included the clubs of Al Bireh Association, Ramallah Islamic and Al Ersal, while the other group includes Al Bireh Cultural, Kafr Neama, Jabaa and Al Shurfa and Sateh Marhaba.
The winner of the first group plays with the second group runner-up, while winner of the second group plays with the first group’s runner-up.  The two winning teams met in the final match while the others teams played matches to compete for the third and fourth places.
On this occasion, NBC General Manager, Mr. Imad al-Hindi expressed his honor to sponsor the Future Stars Championship, adding that it was in line with the Company’s endeavor to support the sports activities in a bid to motivate the young athletes to keep practicing sports, especially football that attracts significant attention from the Palestinian youth.
Mr. al-Hindi highlighted the Company’s interest in supporting the local sports clubs to embrace the juniors and young athletes and to improve their physical and mental abilities in order to protect and immunize them against any negative practices and habits, which would help those young people to lead a better future.
Wishing best of luck for the participating teams, Mr. al-Hindi praised Al-Ersal Club for its role in leading such kind of competitions that would help young players improve their skills.
On his part, Chairman of Al Ersal Club, Dr. Mohamed Shahin, extended his thanks to NBC for sponsoring the Future Stars Championship organized as part of a series of sports activities, competitions and championships launched by the Club for the various young age categories.  Dr. Shahin underlined the Club’s keenness to push the sportive pace forward with the target of preparing a well-behaved generation that believes in sports as a way for development, through discipline, commitment and national affiliation, in addition to establishing close and strong ties with other sister clubs.