Symbolizing the Values of Solidarity in the Holy Month of Ramadan, National Beverage Company sponsors a Ramadan Iftar for 320 Orphan Children in Gaza 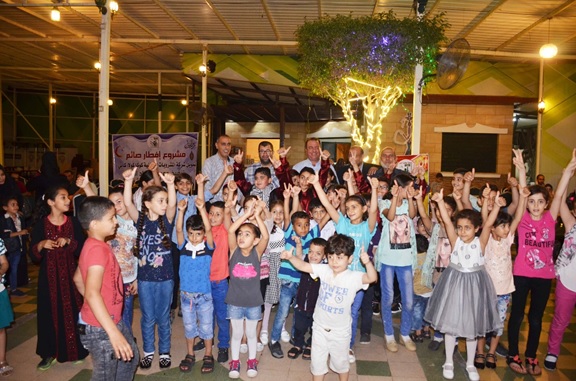 Gaza- Al-Hayat Economic-The National Beverage Company Coca-Cola/Cappy (NBC) sponsored a Ramadan Iftar banquet in Gaza, which hosted over 320 orphan children and a number of NBC managers and employees in Gaza Strip. The event is in line with NBC’s commitment to honor the values of solidarity and brotherliness during the Holy Month of Ramadan.

The Iftar was organized at the Southern Roots restaurant at Gaza which where orphan children from Hasad Al Khair Association for Orphan Care and the Mercy Association for Children attended the banquet with their guardians and teachers.
Mr. Imad al-Hindi, General Manager of NBC, confirmed that NBC Management and employees are extremely happy to share Iftar with the orphan children in the Holy month of Ramadan, out of its faith in the importance of this annual event which pleases the children and surrounds them with the feelings of family bonds which many of them miss.
Mr. al-Hindi added: “We are devoted to spread the sense of affinity, brotherliness, and mercy in the month of mercy among the children in Gaza Strip that still suffers special and hard living conditions which deprives them from the normal life like their peers”. He emphasized that children are one of the most important groups that needs extensive care and embrace, especially the orphans and children with special needs, and children with special social needs.
Mr. al-Hindi pointed out that NBC looks forward to further support and embrace the less-privileged children in the remote and marginalized communities to give them a glimmer of hope and to set up a better future for the next generation. He commended the Management of Hasad Al Khair Association for Orphan Care and the Mercy Association for Children for their educational and humanitarian services to the children which would help building their character, boosting their self-confidence, broadening their understating, and surround them with affinity and love.
Dr. Sobhy Rachid Al Yazjy, President of Hasad Al Khair Association for Orphan Care, extended thanks and gratitude to NBC for keeping its tradition sponsoring the Iftar ceremony of the orphan children in Gaza and for filling their hearts with happiness and joy. He added that the continuous act of charity is a grace from God. He appreciated Mr. Yasser Arafat, NBC branch Manager in Gaza, and NBC Board of Directors for their cooperation to organize the Iftar banquet every year in the restaurants, hotels, and rest houses which contributes in eliminating the social division that the orphan might feel toward his peers.
Mo’men Barakat, Director of the Mercy Association for Children, extended thanks to NBC for sponsoring the annual Iftars of the orphan children in Gaza Strip. He affirmed that such event has a remarkable positive effect on the children in the psychological aspect and it fills their hearts with happiness.