Beitunia – Al-Hayat Sports - Murad Bannora, Manager of the Academy for Talented Footballers in Jerusalem, said “having a close look at the World Cup Trophy is a dream for all athletes and all peoples." He described in his own words the great joy of the Academy students on their arrival to NBC to take remembrance photos with the original World Cup Trophy. The celebrations of hosting the Cup continue during the next morning. NBC organizes three days of celebrations, where sports teams and some schools have been invited by NBC and FIFA to see the World Cup Trophy.
SOS Children's Villages Visit
A group of SOS Children's Villages arrived from Bethlehem, after being invited by NBC, to participate in hosting the World Cup Trophy. The 120 children had the opportunity to take photos with the World Cup Trophy. Mahmoud El Aarej (14 years) said that he got up at 6 in the morning eager to see the Trophy. He plays football for both the teams of S.O.S Village and the Children without Borders. He is looking forward to join the national team and hopes to compete with the Brazilian Team, his favorite football team. Abdullah Qamhawi, SOS village manager, expressed his gratitude to NBC for inviting the village children. He added “Seeing the Trophy made the children smile, as they could for the first time see it closely after seeing it several times on TV. They will never forget this experience.” From his part, Nabil Al-Helw, the activities coordinator and general mentor in the village said that enabling children, through such a visit, to follow up the World Cup Trophy hosting, creates a greater sports awareness in them.
The Children Wish: The National Team reaches the World Cup Competition
Bilal Awad, Scout Supervisor in Abu Dis Club, stated that hosting the World Cup Trophy, is a rare and extraordinary event, especially for the juniors’ team, who came to see the Trophy. He praised NBC for its efforts in the perfect organization of the event. In addition, Ibrahim Mazara, Arab Jahalin Club President, also expressed his deepest thanks to NBC for inviting the first team to take photos with the Trophy, saying “we accepted the invitation with pleasure, as hosting the World cup Trophy in Palestine is a cheerful event and a reason for feeling proud. It also raises the morals of the sports teams that are increasingly developing in Palestine”. 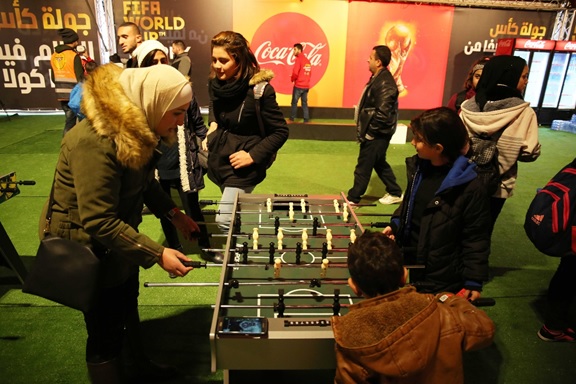 Children and young people in Palestine, who arrived to NBC premises, had the opportunity to play in events’ tent held in front of NBC. This tent included mini-courts for playing football and some electronic games using virtual reality glasses. Alaa Abdul Latif, Della Sale basketball team player, expressed his happiness for attending such an event, saying "We had a very nice time in the games and events tent and I am so happy for receiving the World Trophy in Palestine. Although I am a basketball player, sports remain the same, and winning is a big dream.” Sadel Nazih, a player in the female youth football team of Kafr Naama, who has dreamt to closely see the World Cup Trophy, felt a deep joy saying “The Trophy is glamourous to see closely.
All attendees could have photos with it without any troubles.” Bayan Marmash, a player in Jel Al Mostakbal school team in Kafr Aqeb, perceived the World Trophy to be different from any other trophies. She added that this Trophy is a global honor and seeing it is a dream. Khalid Shoman, chairman of the Real Madrid fans' association in Palestine, said that the existence of the World Cup Trophy in Palestine is a historic event, and has a substantial impression on the Palestinian sport, which has become strongly represented in FIFA. Nadine Jaafar (15 years), a Della Sale basketball team player, expressed her and her teammates’ happiness to give a close look at the World Cup Trophy. She said it was nice to see the World Cup Trophy here in Palestine. Everyone loves football. 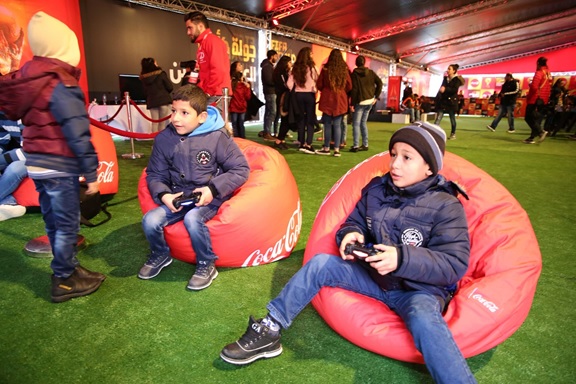 Mary Mina, a member of Della Sale Club Jerusalem administrative board, confirmed that having the original World Cup Trophy for the second time in Palestine, is something to be proud of, as we feel to be a part of the world and to be really present of the sports world map. Mina also thanked NBC for the perfect organization of hosting the World Cup Trophy in Palestine.
Mazen Al-Kony, the administrative director of Al-Ittihad club in Nablus, who joined the event with 46 children from the club, said that hosting the original World Cup Trophy in Palestine is an honor and motivation for the juniors’ team, whose members looked happy to give a close look at the Trophy for the first time in their life. He expressed his hope to see the Trophy again in NBC premises, and we thank it for sponsoring Al-Ittihad club.
Hanin khalil, member of the administrative body in Sareyyet Ramallah, has expressed her delight for seeing the Trophy up close and having a photo opportunity. She said that having the Trophyin Palestine is something to be proud of; it gives the children the opportunity to dream big and to grow up pursuing their dreams. She added that the effort of NBC to bring the cup to the children motivates them to move forward, raise their ambitions, and work harder to achieve further success. Anwar Asbah, (13 years) basketball player in Sareyyet Ramallah also expressed his delight that the Trophyis now in Palestine, and that he got the opportunity to see the real-World Cup Trophy
.
Ward Akkah, (9 years) from WOSPAC Academy, believes that having the world cup in Palestine is a proof of the nation's great progress in sports. He said he was happy and excited to see the real cup, and hopes that one day he would become an international football star. Khaled Al-Asmar, (10 years) said he was proud that the cup is in Palestine, and hoped that the national team would make to the competition in the future. Ashraf Akkah, a parent and football fan, said that having the cup in Palestine is a significant phase in the development of sports in the country. He pointed out that this event motivates youth, especially young children, and thanked NBC for sponsoring it. Today is the cup's final day in Palestine as it will move to the next stop: Amman, Jordan's capital.