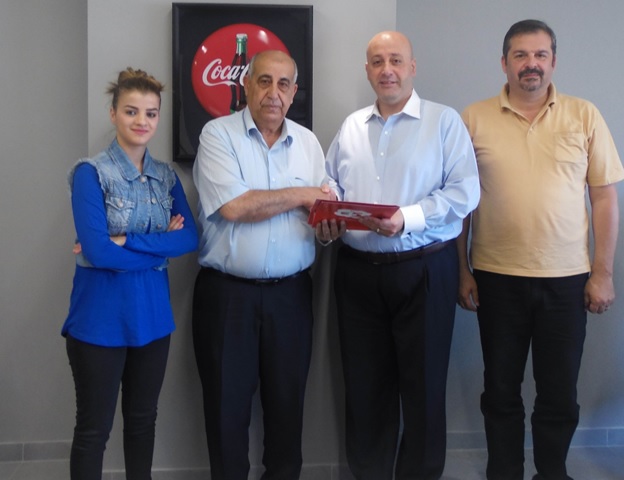 Ramallah – Al-Ayyam - The National Beverage Company Coca-Cola/Cappy signed an agreement with the Cultural Club of Al-Bireh to sponsor the Women's Swordplay Team for the second year in a row.  NBC will provide, under the agreement, sportswear and sports tools and equipment needed for the team, as well as support and develop the Team in technical terms.
The agreement was signed at the Company's headquarters in Beitunia by both Mr. Imad al-Hindi, General Manager of the National Beverage Company Coca-Cola/Cappy, and Mr. Dawood Metwaly, President of the Cultural Club of Al-Bireh and the President of the Swordplay Federation of West Asia, in the presence of Amin Sobaih, Director of International Relations at the Club, Amanda al-Sheikh, Media Spokesman for the Club, and Alaa Esawi of NBC.
Mr. Imad al-Hindi stated that NBC management is pleased to have renewed the sponsorship of the Swordplay Women's Team for the second time, after the Team has proven that it is well-deserved, entitled and has achieved the best results in various tournaments.  He confirmed that the Company was interested to provide sponsorship for the difference women teams in various kinds of sports out of its belief in the high sporting talent among the female category in Palestine, and due to their right to obtain training opportunities and competition on equal foot as males.
He also stressed the need to contribute to upgrading the sport of Swordplay in Palestine which faces many challenges, most notably the financial cost and shortage of trained cadres. He affirmed the Company's commitment to further perform its role for the promotion of this sport and other sports that still need attention and support to enable them to face the challenges and continue to attract and encourage all groups to get involved in the various fields of sports, as well as activating the women's sports role in Palestine, and supporting their presence in all sports forums and sectors.
Mr. al-Hindi added that the interest in supporting sports and promoting women's sports as well must be an integral part of the community obligation concept of the institutions of the private sector and civil society, which contribute to enhancing the role of women and youth in various fields of life.
On his part, Mr. Metwaly voiced the gratitude of the Club for the noble care provided by the National Beverage Company.  He valued the role of Mr. Imad al-Hindi in the continued support for the Cultural Club of Al-Bireh and the Women's Swordplay Team, by providing the Team with fencing swords and the means of protection according to generally accepted standards in the sport of fencing.
Mr. Metwaly said that the Company’s sponsorship of the Team in the past year have had a positive impact on the participations on the Team in external training camps in Jordan and Ukraine, as well as the preceding training and preparations, in addition to providing the Team with sportswear and supplies.
Mr. Metwaly added that the Team that consist of 36 female players aged between 9-18 years has achieved excellent results over the past year, as it earned a gold medal in the Arab Championship and won the first positions in local tournaments, in addition to the outstanding role of the team players in the national team in the Arab and Asian tournaments.  He stressed the importance of the continued support provided by the National Beverage Company for the sports teams, especially women’s team, has given a strong incentive to the girls of the fencing team who played in the various local, Arab and Asian championships.