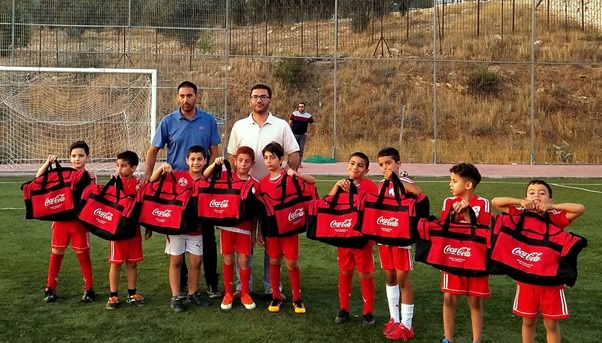 Jerusalem - Palsport News Agency:  The largest show on the face of the earth, namely 2016 Rio Olympics, is just a few happening.  As always, in partnership with the National Beverage Company Coca-Cola/Cappy (NBC), the Palestinian Sports Society (Palsport) launched, for the third Olympics in a row, its sports programs and messages from the Capital Jerusalem for the 2016 Rio Olympics.
The initiative is a part of a series of tournaments and sporting activities and events dedicated to the young age groups to make them aware of the Palestinian mission participating in the Olympics and the games that are part of this international event.   Such activities will continue in many clubs and institutions in Jerusalem for the duration of the Olympics.
Our first sports message came from the top of Mount of Olives in the Capital Jerusalem, in cooperation with the Palestinian Football Talents Academy. The activity was attended by Firas Al-Qaisi, Palsport General Manager, and Firas Abu Mayaleh, President of the Academy.
Mr. Imad al-Hindi, General Manager of NBC, noted: “NBC realizes that the Palestinian people are interested in the Olympics and they follow-up Palestine’s representatives in such global forum. NBC is committed to catch up with the interest of the Palestinian people in the global sports. Such activities that are organized by Palsport and NBC represent a message of support and encouragement from the Palestinian Capital of Jerusalem to the Palestine’s Mission that will participate in swimming, athletics, Judo, and horseback riding.”
On his part, Wesam Albokhari, Palsport Editor, thanked NBC for donating sports bags, footballs and NBC products to the participants in the activities.