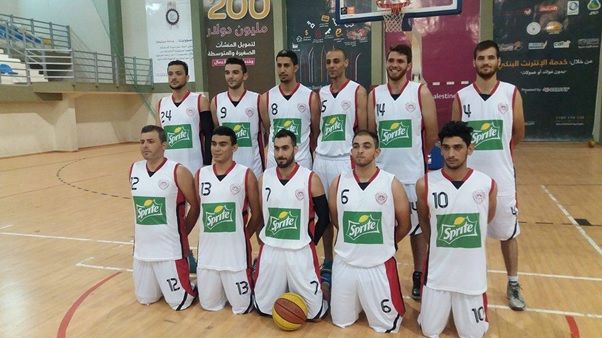 [Photo caption: Basketball Team of Gaza Sporting Club]
Gaza - Alayyam: The National Beverage Company Coca-Cola/ Cappy (NBC) announced that it provides support for the Basketball Team of Gaza Sporting Club by supplying the Basketball Team with the sports supplies and sportswear needed. The donated items carry the logo of Sprite, one of the NBC’s products.
Mr. Imad al-Hindi, General Manager of NBC confirmed that the donation was one of the high priorities set by NBC to support and develop sports in the Gaza Strip based on its faith in the importance of bringing life back to the Strip, responding to the passion of young athletes in Gaza with the aim of refining their skills, especially that sports is one of the core activities in the life of the youth.
“NBC is pleased to provide Gaza Sporting Club Basketball Team with sports supplies and it aspires to have further opportunities to present support to all the teams and clubs in Gaza in order to empower the men and women athletes and help them gain the ability to compete in various local, Arab, and international events”, added Mr. al-Hindi. He affirmed that NBC Management is keen to continue supporting the sports institutions in Gaza Strip out of its faith in the superior sports abilities, talents, competencies of the youth and athletes in the Strip despite the tough challenges and living conditions they go through.
Mr. Moussa El-Wazir, President of Gaza Sporting Club, valued the support presented by NBC to the first basketball team. He added that NBC is perfectly a patriot company with a national capital noting the key role performed by NBC in building the Palestinian economy and assuming its social responsibility toward the Palestinian youth, especially the athletes.
El-Wazir noted that Gaza Sporting Club, which was founded in 1934 and includes 400 players, is in a real need to the support of the national companies calling upon them to follow NBC’s footsteps in supporting the youth, sports, and education sector and providing them with opportunities and to assume their patriot role. He added that Gaza Sporting Club Management is proud of its partnership with NBC as well as its excellent performance serving the sports sector.
Gaza Sporting Club is one of the oldest Palestinian clubs and it includes versatile sporting teams that embrace all age groups; namely the football, basketball, volleyball, karate, taekwondo, and weightlifting teams.