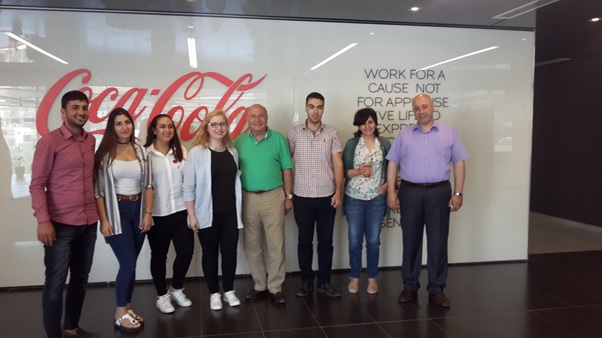 Ramallah- Alhayat Economic- With confident looks and determination, the university students who graduated from INJAZ Palestine and were awarded the Coca-Cola Foundation scholarship in the Turkish Bilkent University said they look forward to return to their home country to contribute to its development and prosperity. One year in Bilkent is enough to open up the horizons of the future and change to the better for them as well as encourage them to make use of their experience to participate in building their country.
Upon the return of the five students to the country after spending a full year study in the Turkish Bilkent University, the National Beverage Company Coca-Cola/Cappy (NBC) hosted the students who obtained the scholarships in its headquarter in Beitunia and the meeting was attended by Zahi Khouri, Chairman of NBC, Imad al-Hindi, General Manager of NBC, and Randa Ramhi Salameh, General Manager of INJAZ Palestine, to share the details of their experiences which they described as “important”. The students will return to the study benches in their universities in Palestine after spending one entire academic year in Bilkent University.
The students who received the scholarship said they are happy with their experience to study abroad. Student Ronza Hamouri, who studied marketing at An-Najah National University, described her experience in Bilkent University as “full of useful lessons”.  She added that the atmosphere of the university was the biggest element that motivated her success and determination and despite the variance of education methods abroad, she did not find it hard to adjust with the atmosphere of the university. Ronza said: “The University with its campus, professors, and staff were my key support in the educational aspect. This experience is the first step in my future success and sense of self-pride”.
Shaden Al-Shaer, a Business Administration student at Bethlehem University, affirmed that the most important thing she gained from the experience is the friendship she made with wonderful people from whom she learned a lot about the world cultures in addition to improving her English language. Shaden added: “I visited many places and wandered around the city and made nice memories that I will remember my whole life”.
Imad Al-Aghbar, a Computer System Engineering student at An-Najah National University, described his experience at Bilkent University as “one of the momentous things he did in his life”. He added: “during my study at Bilkent University I learned how to accept the others, respect them, and not judge them no matter how different they are whether in thinking, belief, or opinion”.
On contrary to the expectations of the five students who were concerned about going away from home and from their families and friends, they had an experience full of success and wonderful discoveries, which inspired them with new ideas to develop themselves and their country as stated by Laila Abu Ayyash, student of English language and arts at Bethlehem University. Further, Mohammad Barham, student of computer engineering at Birzeit University, said that at Bilkent University he found the complete excellent educational atmosphere he was looking for. “Experiencing a totally different experience than yours drives you to deal with different people with the way they like. About returning to my university to complete my education, I will use it to pass on to my colleagues some of the things I learned abroad”, he added.
During the meeting that brought together the management of NBC and INJAZ with the five students, Zahi Khouri, Chairman of NBC, said he is proud with NBC Management supporting and sponsoring the scholarships presented to the students at the Turkish Bilkent University, in partnership with INJAZ. He affirmed the importance of supporting the Palestinian youth in their educational path and providing them with the practical experiences by consolidating them in academic societies different than their usual environment. “The rate of higher education in the Palestinian society is one of the highest rates in the Arab region, and our national universities receive high ratings internationally, however, having the students go through new experiences in the international universities enables them to continue their education with high confidence until they reach the peak of their ambitions”, added Khouri.
Mr. Imad al-Hindi, General Manager of NBC, confirmed that NBC has invested in supporting the education and youth sectors in the country. He added that in cooperation with INJAZ, NBC seeks to provide the Palestinian students with more scholarships in the top international universities. He asserted the important addition of this experience to build the personality of well-versed, educated, and cultured Palestinian youth who are open to the pioneering ideas and initiatives and consequently are capable of making a change.
On her part, Randa Ramhi Salameh, General Manager of INJAZ Palestine, praised the continuous partnership with NBC. She asserted that this program would not have achieved successes for five years in a row if it were not for the joint action between both parties.  Salameh added that the visions of INJAZ and NBC got together toward unleashing the spirit of creativity and contribution to uplift and refine the skills of the youth in order to enhance their opportunities to get into the labour market as qualified leaders and pioneers to serve their local communities. Therefore, this scholarships program managed to contribute in enhancing the abilities of many students who work today in high-profile and leadership positions.
“Through the scholarships programs supported by Coca-Cola Foundation, we aim at giving the Palestinian youth the opportunity to go through new experiences with different cultures, as part of educational techniques which are different than the traditional techniques prevailing in or education facilities”, added Salama.