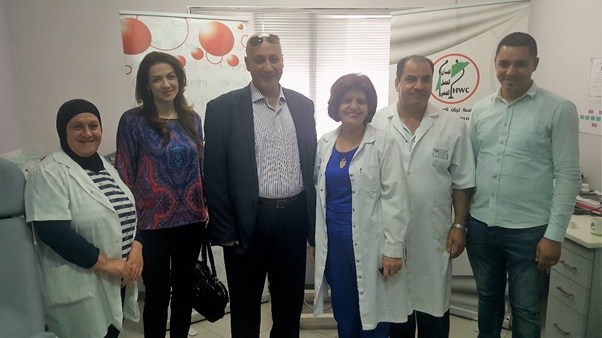 Ramallah- Alhayat Economic - The National Beverage Company Coca-Cola/ Cappy (NBC) donated a sophisticated Hysteroscopy to Dunya Women's Cancer Center in Ramallah, which will contribute to providing high quality and scarce tests countrywide to help in the early detection of uterine tumours.  This donation is complementary to NBC’s support and cooperation with the Center, which provides early cancer diagnosis services to the Palestinian women.
The Hysteroscopy was delivered to the premises of the Center in Ramallah in the presence of Mr. Imad al-Hindi, General Manager of NBC, Dr. Nofouz Maslamani , Medical and Administration Manager of Dunya’s Center, in addition to Mr. Alaa Esawi, from NBC, and Mrs. Nedaa El-Ekr, PR Manager, and Mr. Khaled El-Faquih, Information Manager in Dunya’s Center.
Mr. Imad al-Hindi said that NBC is proud of its partnership and support to Dunya’s Center, one of the Health Work Committees’ centres, for the excellent services provided by the Center in the area of early detection of women’s tumours.  He said that he takes pride in NBC donation of the Hysteroscopy for uterine tumours’ diagnosis to Dunya’s Center which will help in the early detection of the uterine tumours and avoid catching the disease and will also help treat the tumours in their early stages and consequently increase the women’s recovery rates. 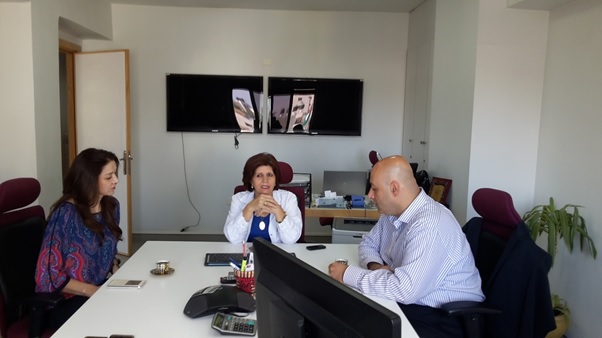 Mr. al-Hindi also said that NBC Management is keen to continue providing the financial and technical support to Dunya’s Center out of its commitment to support the Palestinian women, being a fundamental part of the Palestinian society, and in conformity with NBC strategy reinforcing the Palestinian health sector.
Mr. al-Hindi added that NBC has previously paid the costs of conducting early tests of the less-privileged women. He commended the role of Dunya’s Center and the awareness campaigns launched by the Center about the importance of early detection of women’s tumours.
On her turn, Dr. Nofouz Maslamani indicated that having a sophisticated hysteroscopy at Dunya’s Center is momentous as it contributes in the early detection of uterine diseases and it can be used in the minor surgical procedures besides helping in taking biopsies.
Furthermore, Dr. Maslamani valued the care provided by NBC to the Palestinian women and the health sector indicating that this is not the first cooperation of its kind between the Center and NBC which is devoted to its community responsibilities. She also called upon all the Palestinian institutions, individuals, and companies to take after NBC and to become partners in developing the Dunya’s Center, which is the first center of its kind in Palestine.