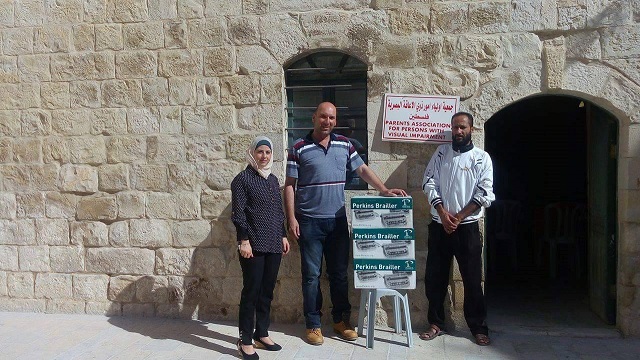 Jenin – Al-Hayat Economic – The National Beverage Company Coca-Cola/Cappy (NBC) donated a number of Braille’s Printers for the blind to the Parents of Children with Visual Impairments Society (PCVS) of Palestine located in Arraba, a Palestinian town to the west of Jenin.  To provide the visually impaired children with specialized educational environment, NBC granted the Society three customized Braille’s Printers. The charitable society embraces 135 blind children who are between the ages of 4 and 18.
NBC’s General Manager, Imad Al-Hindi was happy with the frequent cooperation with this charitable society. The Society offers its affiliates and their parents’ distinguished services. The donation indicated the commitment of NBC to the civil community, especially visually impaired persons, Al-Hindi added. He went on to say that such group of the community deserves to be treated as a significant part of the society, and must receive utmost care and attention, and its individuals must effectively be integrated with the entire community.  The Company believes in the importance of societies caring for those with disabilities, and the talents, creativity and potentials of this group, Al-Hindi noted. Therefore, NBC provided them the printers to enable them become an interactive component in the comprehensive educational process, and to read, as well as to interact with specialized educational programs.
Al-Hindi expressed NBC’s readiness to continue cooperating with the society in the future, to best serve, and give equal opportunities to those available to their healthy, the disable children.
The chairman of PCVS Bashar Al-Saffady explained that a group of parents of the children with visual impairments had established the society years ago to make their children reach out to the community, and to prove them with proper environment to make them integrate with the community.
The official also added that the society aimed for improving educational environment of those with disabilities in Palestine in order to bring out the children’s talents and creativities. Moreover, the parents shall receive emotional support through directly guiding them and planning cultural, medical and entertaining trips for them and their kids.
Furthermore, the society gives sound and healthy groups awareness campaign on the means of dealing with the blind anywhere. Along the same lines, Al-Saffady expressed his deep thanks and appreciation to the management of NBC for giving Braille’s Printers to the children, highlighting that they were a very vital educational tool for the blind. “We take pride in our relationship with the company, as a primary supporter. The company had sponsored honorary ceremonies for outstanding students in secondary school examinations,” he added. The official hoped that the partnership between NBC and the charitable society continues to years to come to “draw a smile on the faces of the blind children whose eyes could not see, but hearts could still bump with emotions.”