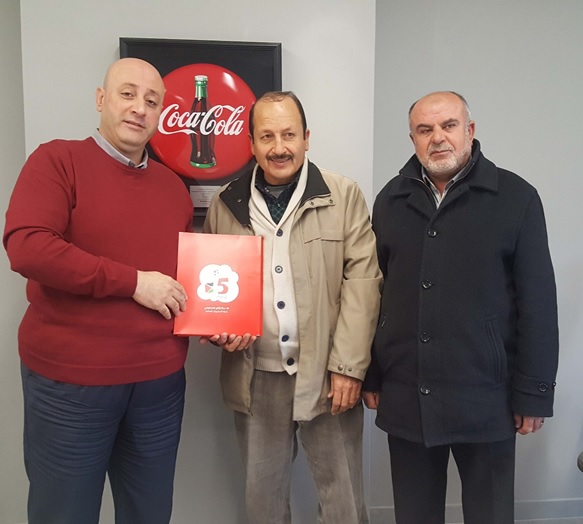 Beitunia- the National Beverage Company Coca Cola/Cappy (NBC) donated supplies, lighting systems, and floodlights to contribute in the equipping of Beitunia Stadium Club Football. The agreement was signed at NBC headquarters in Beitunia by Mr. Imad al-Hindi, General Manager of NBC, and Shaker Dawla, President of Beitunia Club, in the presence of Ahmad Zayed, from Beitunia Club, and Alaa Esawi, from NBC.
The equipping of the stadium, located near Beitunia School for Boys, will contribute in providing the proper sporting environment to accommodate the sport talents of youth and juniors of Beitunia population.
Mr. Imad al-Hindi asserted that NBC will continue its support and donations to boost the sports culture in Palestine and attract the youth and juniors to the sports activities which directs them to invest their spare time in a meaningful way in addition to supporting the mental and physical health as well as boosting and cultivating sports potentials and talents and contributing in scouting and qualifying the Palestinian champions who take part in the sports events at the regional and international levels.
Mr. al-Hindi explained that such support comes in line with NBC devotion to support the youth and sports, while such contribution represents a part of other contributions as NBC will continue supporting the sports activities at Beitunia and support th
e population who embraced NBC since its inception back in 1998. He added that NBC takes pride in its ongoing partnership with Beitunia institutions and it will keep supporting different activities which would develop the town and provide Beitunia population with opportunities.
On his part, Shaker said Beitunia Club Management is grateful for NBC which donated lighting poles and floodlights for the Beitunia football field. He called upon all the local companies and institutions to take after NBC which took the initiative to support Beitunia Club. He noted that the field will give the players and juniors of the youth and kids teams in the Club the opportunity to play on a grassy field of excellent specifications and the most suitable place for their training.
Dawla also thanked the people of Beitunia and its population living in the USA and the Palestinian diaspora for contributing in building the staduim. He added that Beitunia Club, which was established in 1973, seeks to encourage the youth and all age groups to practice sports. It also organizes art, cultural, and social activities and events in addition to sharing all religious and national events with the people of Beitunia who amount to 40,000 persons.